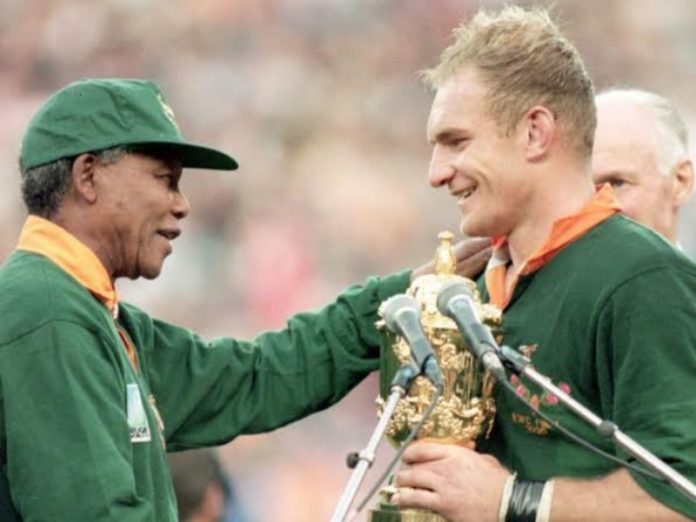 Jumping fully clothed into a freezing cold swimming pool in mid-winter seemed like a good idea at the time. As the final whistle blew and South Africa had won the Rugby World Cup I knew the South African nation was on the road to recovery and I was part of it.

No matter that, ten minutes later, I was forced to watch, dripping wet and trembling, through the window from the stoep as President Nelson Mandela (in his number 6 Springbok jersey) shook hands with Francois Pienaar.

A year after that amazing day, Bafana Bafana won the African Cup of Nations in 1996, when it seemed to be a confirmation that a great nation was emerging.

That was more than two decades ago.

If you believe, as I do, that sport is one of the greatest unifying forces in a nation, then it is worth looking at where we are now.

Looking only at team sports, it is safe to say that the country hasn’t done badly. South African rugby, beset as it is by administrative problems, is nonetheless doing well. A number of major victories have seen the Springboks win among other tournaments the Rugby Championships, win tests and more than anything else, win the Rugby World Cup in 2007 and 2019.

Any South African sports fan, must be impressed with the way Banyana Banyana have quietly gone about their business of playing the best football they possibly can and the netball ladies are aiming for excellence every time they appear on court.

We can be cautiously optimistic that Cricket South Africa are probably on the mend.

Now! Having said that, we all know about the massive elephant in the room. It’s like the old joke about the brother in prison. You love him, but you don’t talk about him.

South Africa is a football nation. It is, without a doubt, the game that gets the South African hearts racing. Any success, however minor, is celebrated like a World Cup win. Except there is nothing to celebrate.

What are the problems in football? Thousands of words are written about that every day.

Lucky however, will ask a question instead.

Who of you know what it feels like to be so consumed with joy, that you do a somersault into a freezing swimming pool because your team has performed a miracle?

I believe that, somewhere in South Africa there is someone who is going to kindle the fire and lead South African football to international greatness – and have the entire nation jumping into cold swimming pools.

Let’s find him or her.