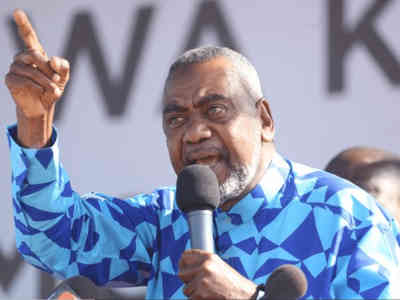 The man is gone but the dream lives on

Maalim Seif Hamad’s dream was to see his beloved islands of Zanzibar turned into the Dubai of Africa, an offshore haven for the bustling economies of East Africa.

He embodied the split nature of Tanzania, a country created in haste in 1964 as a merger between the vast nation of Tanganyika and the tiny islands of Zanzibar.

He was prominent in Tanzanian politics, a friend and colleague of the country’s legendary founder Julius Nyerere, while being a Zanzibari nationalist.

Mostly he was a democrat and a man of high principle, a feature that in the rough world of Tanzanian politics required mountains of patience.

Born on the island of Pemba, then part of the British protectorate of Zanzibar, he became a teacher which is why he was always referred to as Maalim.

He was a member of the Zanzibar Revolutionary Council after independence and rose to be a member of the central committee and head of economic planning for Tanzania’s ruling party, the CCM, between 1977 and 1987 before becoming Chief Minister of Zanzibar.

He was expelled from the ruling party after agitating for multiparty democracy and was imprisoned for two and a half years between 1989 and 1991 before Nyerere agreed to end one party rule in Tanzania in 1992.

Hamad along with other former ruling party members founded the opposition Civic United Front Party which despite winning six straight elections between 1995 and 2020 was always denied victory – such was the fear within the ruling party of losing control.

He was a beloved figure, especially on Pemba, where he always preached non-violence and reconciliation.

Most recently, in the elections of November 2020, members of Hamad’s party, the ACT-Wazalendo party, were shot, imprisoned and bludgeoned, and he was forced to become Vice President in a government of national unity.

He soon had to face a new challenge. Tanzanian President John Magufuli denied the existence of Covid in Tanzania, even though it was clear that many people were dying of the disease.

Magufuli shunned lockdowns, discouraged social distancing and the use of face masks, banned the release of data and refused to acquire vaccines. He called for prayers and herbal remedies to defeat it.

Hamad was hospitalized on February 9th after he and his wife tested positive for Covid.

He died on Tuesday, his dream of an economically prosperous and democratic Zanzibar a long way from fulfillment.

But he did plant the seeds for a different future and his example of tolerance and moderate Islam was an inspiration for the entire continent and the Indian Ocean region.

Tundu Lissu, the opposition candidate in the November 2020 elections, said of him: “Years of detention, treason trial, torture and untold hardships didn’t break him. Through highest highs and bottomless lows, he held high the banner of Zanzibari national aspirations.”