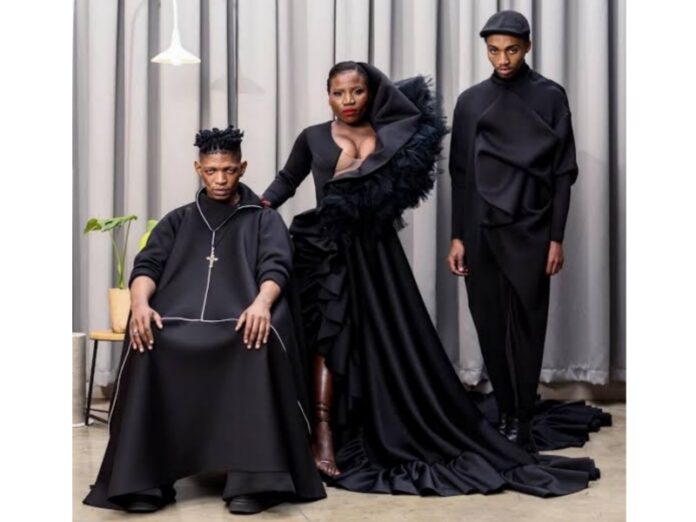 Born in 1983 towards the end of the apartheid era in Katlehong, Johannesburg, Lebohang gang Quiteria Kekana would grow up to become one of the country’s foremost designers.

Kekana gained international recognition in the trade, a dream that becomes a reality for few township children in Mzansi.

In the 1990s, he attended school in a small town in Limpopo called Blood River before moving back to Gauteng to further his studies at the Tshwane University of Technology, which was called Pretoria Technikon back then.

It was not until 2010 that the talented Lebohang got the opportunity he deserved when he met fellow designer George Malelu at the Mpumalanga Fashion Week – an encounter first reported in Youth Village.

The designers merged their creativity and formed a fashion brand called Quiteria & George, which provided Lebohang the opportunity to learn from the best while dressing stars for red carpet events.

Together they dressed big stars like Boity Thulo, Dineo Moeketsi and Uyanda Mbuli, to name just a few. They were invited to glamorous high end fashion events all over the world. They were part of the very first French European Indian (FEI) Fashion Week at the Eiffel Tower in Paris six years ago – the first fashion week in history to be permitted the opportunity to showcase at the iconic landmark.

FEI Fashion Week producer and choreographer Danny Moodliyar had called the duo a perfect fit for the event, after seeing their work at the 2016 Durban Fashion Fair.

“I have seen the amazing work Quiteria & George have done with their fashion label and can vouch for their level of commitment, creativity and excellence in workmanship,” Moodliyar had said.

In 2019, Lebohang made history with actress and fashion designer Enhle Mbali Mlotshwa when they designed Beyonce’s dress for the Global Citizen Concert.

He also drew a lot of attention to his own fashion label Quiteria Atelier, which dressed Enhle Mbali among many other A-list celebrities at the SA Film and Television Awards in May 2021.

Enhle Mbali, who was named the Best Dressed Celeb by TimesLive after the event, had worn several different gowns designed by Lebogang in the SAFTAs.

But in July last year, the industry received sad news from his team that he was going through chemotherapy after being diagnosed with multiple myeloma cancer, which forms in white blood cells called plasma cells.

While his team of designers at Quiteria Atelier were busy sharing their April 2022 collection on Instagram, Lebohang’s family announced that he had passed away at the age of 37 on Sunday 17 April, due to cancer.

He is survived by his son, parents and siblings.