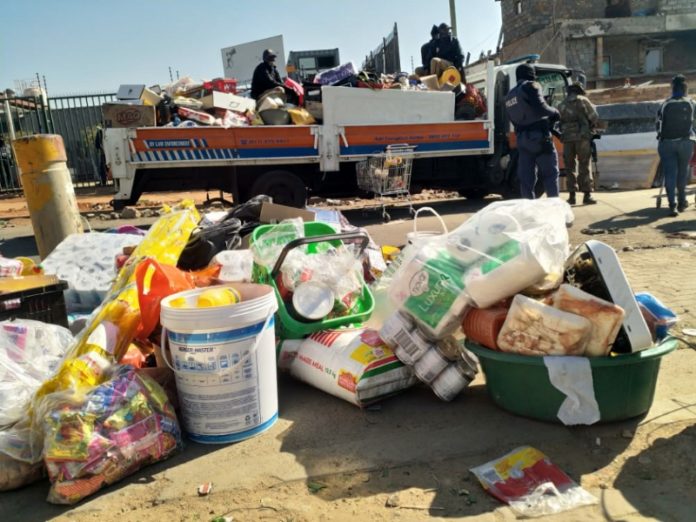 The shacks smelled of rotting meat, and their small rooms were stacked to the ceiling with goods, as if they were grocery stores.

A bus full of South African National Defence Force soldiers arrived at Alex’s Pan Africa Mall at about 9am to join the police and the community.

Justice and Correctional Services Minister Ronald Lamola and Gauteng MEC for Community Safety Faith Mazibuko took a walk around the mall to inspect the damage.

Minister Lamola described the unrest as economic sabotage, after scores of businesses were plundered to the ground.

Then the real work started, with local residents joining the law enforcement members, leading them to many shacks suspected to be holding looted goods.

The police found different kinds of items in the houses. There was meat under the bed, building materials on the rooftops. In one shack, a whole lamb carcass was in the fridge, with its legs sticking out the door so that it couldn’t close.

Trolleys belonging to different shops were scattered in the dark and narrow passages.

Ward councillor Adolf Marema, who has been trying to get people to stay away from the violent protests, said he never thought that there could be so many stolen goods in just one building that houses multiple shacks.

“This is unbelievable. I don’t know how the people will recover from this. This is the beginning of real hardship,” said Marema.

While the police were searching, residents stood and watched from outside the police tape.

Those found in their houses were made to carry what they stole to the police truck. The Alexandra police station had trucks loaded with groceries and other goods that they had managed to recover.