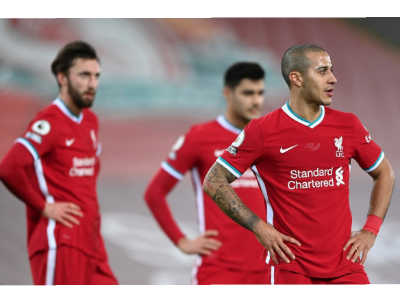 Liverpool are becoming a laughing stock with every team in the English Premier League wanting a piece of them.

On Saturday the reigning league champions lost yet again at home for the fourth consecutive time.

They were beaten 2-0 by Everton in the Merseyside derby.

This was a historic win for the Toffees who last defeated their bitter rivals in the league at Anfield in 1999.

This was, however, a worse day for Liverpool than it was a triumph for Everton.

They continued to make history for all the wrong reasons this season.

For the first time since 1923, Liverpool have lost four matches in a row at home.

When they lost to league leaders Manchester City last week it was their third successive defeat at Anfield for the first time since the 1960s.

This is by far Jurgen Klopp’s worst season since joining Liverpool from German side Borussia Dortmund in 2015.

Last season, Klopp was a hero for the Reds after leading them to a historic league victory.

Five years in charge of Liverpool, he won them their first Premier League title after 30 years.

The German blasted his sloppy players who conceded a goal as early as three minutes into the game.

“It is tough to take but we conceded this early goal which was completely unnecessary and have to defend it better,” he said.

Klopp was also frustrated by Liverpool’s failure to take the chances that came their way in a typically frantic derby.

The league title is all but out of their hands now and Man City look well on course to clinch it this season.