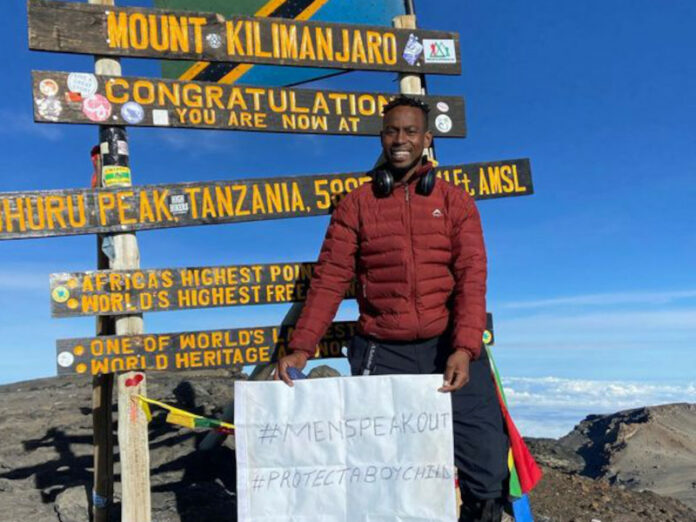 Hiker Matalane Mokgatla from Tzaneen in Limpopo has taken on Mount Kilimanjaro in Tanzania, the highest mountain in Africa and the highest free-standing mountain in the world, in a bid to encourage men to speak out about their abuse.

Over the years Mokgatla, who is a sePedi poet and author, has used his social media platforms to allow men to share some of their experiences in this regard. He suggested channels where the abused men could seek help.

His long walk to Uhuru peak started on Tuesday and he conquered it on Wednesday.

In a video that he used to document his journey, he said the first leg of the hike was the most difficult, but that he was determined to finish what he had started.

“There was a point when even the clothes on my back and my shoes [felt] just too heavy.”

On Wednesday, the second day of the expedition, the climb started at 1am. The weather was favourable; it was not windy, and a full moon lit the landscape.

After conquering Mount Kilimanjaro, Mokgatla took to his social media platforms, saying: “It was not easy, but we made it to the peak.

“My wish is for men to talk about their challenges and stop committing suicide to escape their trauma.

“I wish for the police to pay more attention to the cases of men who report abuse without turning them away or making a mockery out of their pain.

“I wish for a young boy to receive the same support and attention as girls do when they report cases of sexual assault,” he added.

Mokgatla said that the Men Speak Out initiative has taught him how to “be human” and ask for help when the need arises.

“Life becomes less difficult when you reach out for help; then you realise that people really do care.”

Mokgatla said the trip had allowed him to meet other hikers from across the world who also shared some of their hiking experiences.