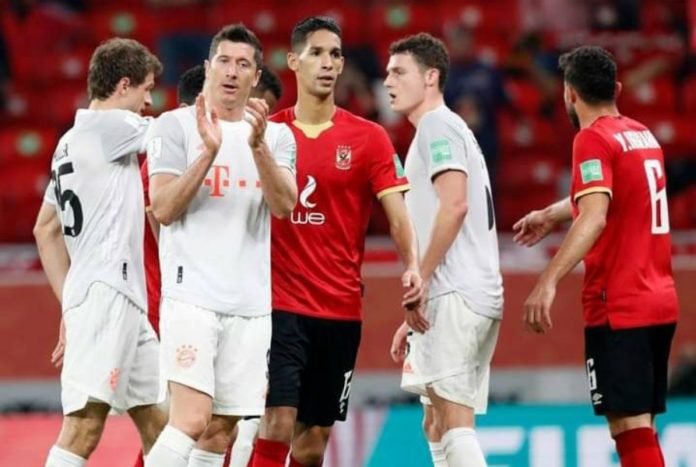 Two Robert Lewandowski strikes earned Bayern Munich a spot in the final of the FIFA Club World Cup. The German champions will now face Mexican champions Tigers UANL in the final on Thursday at Education City Stadium in Doha, in Qatar.

On Monday night the German defeated Egyptian champions AL Ahly 2-0 at Ahmad Bin Ali Stadium to set a date with the Mexicans. Lewandowski, who is the reigning World Player of the year in 2020, scored in both halfs to guide the European Champions to yet another big final.

The striker became the first-ever Polish player to play and score in the Club World Cup.

Even though the Germans were favorites to win against Ahly the Africans gave a good account of themselves. They took the game to Bayern and Ahly players will hold their heads up high and say at least they were not humiliated like Barcelona who lost 8-2 to the same team.

All eyes were on coach Pitso Mosimane who led the Egyptian giants to yet another Club World Cup appearance. This is the Red Devils’ sixth appearance in the competition and they were determined to improve on their best ever result.

In 2006 they ended in third place and they might equal that statistics if they can beat the Brazilian outfit Palmeiras in the third and fourth place on Thursday. Before this match Mosimane, who led Mamelodi Sundowns to the very same competition in 2016, said he expects his players to enjoy themselves.

His players did exactly that and a 2-0 defeat should give Mosimane encouragement when his team resume their Egyptian title defense. The match against the Brazilians will be at Education City Stadium at 5pm and will serve as the curtain raiser for the final that will begin at 8pm.