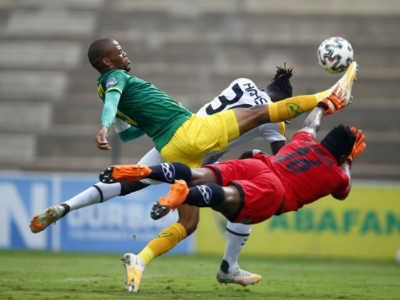 Relegation threatened Black Leopards have ended Golden Arrows’ unbeaten home run with a 2 -1 win at Sugar Ray Xulu Stadium in Durban on Tuesday. The win came as a huge relief for Lidoda Duvha who managed to move away from DStv Premiership bottom of the table.

They are now in 15th place with 12 points and Maritzburg United are now stuck at the bottom.

“This win has given us the breather that we were looking for. We needed this so bad. We will continue to work hard and we will take it one game at a time,” said outgoing Leopards coach Lehlohonolo Seema who will leave the job to Kostadin Papic.

Abafana Bes’thende came to this match hoping to move to second place with a win. Two goals from Mohamed Anas in both halves denied Arrows that opportunity. The home side coach Mandla Ncikazi said he can’t fault his players, who were one man short after Pule Mmodi’s sending off.

“Sometimes acceptance is the best medicine. I must admit, we were beaten by a brilliant goal from Anas. I can’t fault anyone for that. We played well even though we were a man down. And I must say it was a silly red card from our player,” said Ncikazi.

Meanwhile, straight from a 1-1 draw with Kaizer Chiefs three days ago, SuperSport United will face off in yet another Soweto giants match on Wednesday afternoon. United will host Orlando Pirates at Lucas Moripe Stadium in Tshwane at 5pm.

Pirates are going to this game in high spirits after qualifying for CAF Confederation Cup group stages over the weekend. On Sunday Bucs beat Botswana outfit Jwaneng Galaxy 1-0 and won the tie 4-0.

Buccaneers were drawn in Group A together with Enyimba of Nigeria, Al Ahly Benghazi of Libya and ES Setif of Algeria.

The other match on Wednesday will see TS Galaxy host Bloemfontein Celtic at Mbombela Stadium at 3pm.