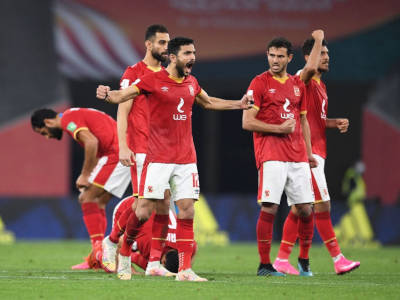 Al Ahly coach Pitso Mosimane has equalled the FIFA Club World Cup record that was set by his club 14 years ago. On Friday Mosimane led the Red Devils to third place in the competition by beating Brazilian outfit Palmeiras 3-2 on penalties.

The 3rd place match was held at Education City Stadium in Doha, in Qatar. It ended in a stalemate after referees’ regulation time and after 30 minutes of extra time.

But the number one team in African was the second best for most of the match against the Brazilians.

Palmeiras had the most shorts at goals, 13 compared to six that was taken by Ahly. The Brazilian had three shots on target while the Africans only had one the whole match.

But with all the ball possession Palmeiras had they could not penetrate Ahly’s stubborn defence.

Palmeiras lost to the Tigers UANL of Mexico in their semi-final on Sunday while Red Devils were beaten by Germany giants Bayern Munich on Monday. Mosimane and his lads will now shift their focus on trying to win another trophy.

The final of the CAF Super Cup match against RSB Berkane of Morocco is on their menu on Wednesday. Ahly are in this final after winning the Champions League while Berkane won the Confederation Cup.

Should Mosimane beat Berkane it would be his fourth trophy under his belt since joining the Egyptian giants late in September. His first was the league title, second was Champions League and the third was the Egypt Cup and he achieved them all in under three months.

After Wednesday’s match Mosimane will return to Egypt to try and defend all three of his titles. In his next three matches he will face Al-Merrikh of Sudan in the first leg of the Champions League followed by Al Nasar in the Egypt Cup Round of 35.

Then he will go up against El Gaish in the league match. Ahly are currently in second place in the Egyptian Premier League two games behind leaders Zamalek who lead them by five points.