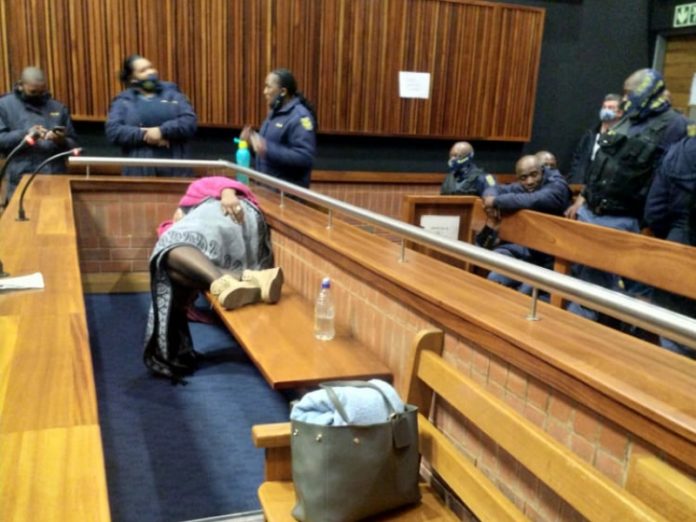 When Rosemary Ndlovu started throwing up in the witness box last week, her case was postponed.

On Tuesday, the former police officer accused of murdering her own family, lay down on the court bench and said she was unwell. But this time the court didn’t buy her story and the proceedings continued.

Ndlovu is accused of five murders and plotting to commit murder. Her trial started an hour late with a heavy police presence.

The first witness was Ndlovu’s alleged hitman. He told the court about how he met the accused and how she wanted him to kill her own sister and her five children in Bushbuckridge, Mpumalanga.

“She instructed me to kill her sister because she, Ndlovu owed a mashonisa, who held her BMW when she failed to pay the money she borrowed,” the hitman told the court.

After the negotiations to carry out the murders were concluded, the hitman went straight to the Tembisa South police station and reported Ndlovu.

“Rosemary even gave me R500 to buy alcohol so that I could get drunk and have the courage to kill and burn her family in their house,” he said.

He said the sting was planned by the police. He and other men – including an undercover police officer – met Ndlovu at the Carstenhof Hospital near Midrand.

“I introduced the undercover cop as my fellow hitman by the name of Rasta,” he said.

Rasta had already put a recording device in the dashboard of the car they were in.

About an hour into the proceedings, the court had to stop as Ndlovu asked to lie down because she was not feeling well.

The sick Ndlovu was accompanied to the Palmridge High Court by about 10 heavily armed police officers.

The court has adjourned and will continue on Wednesday.