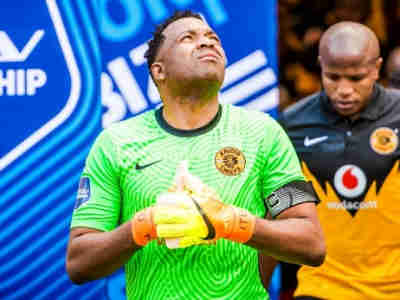 Khune, who was preferred by Gavin Hunt over Daniel Akpeyi, had another horrible day at the office when 10-man Chiefs lost 2-1 at home to AmaZulu on Wednesday afternoon.

The 33-year-old keeper gifted Usuthu the winner just four minutes before the final whistle. AmaZulu used their one-man advantage as Lehlohonolo Majoro capitalised on a blunder from Khune, whose effort to clear a cross fell for the former Amakhosi man to flick the ball into the back of the net.

Before Wednesday’s match Khune had been missing from the matchday squad since December.

Before getting a chance to be between the sticks on Wednesday he missed 10 games in all competitions. After another costly blunder against Usuthu, no one will blame Hunt for benching him again.

Khune, however, had little to blame in AmaZulu’s opener in the stroke of half time. Augustine Mulenga put Usuthu ahead in the 46th minute and in the 67th minute Leonardo Castro equalised from a penalty spot.

Chiefs were once again reduced to 10 men when Darrel Matsheke was sent off. This was Chiefs’ second player in two games in a row to be sent off after Siphosakhe Ntiya-Ntiya also got a red card against Richards Bay in the Nedbank Cup.

This was Chiefs’ three successive defeats after Orlando Pirates, Bay and now AmaZulu. A visitory saw Usuthu jump to sixth place while Chiefs remain in ninth.

Meanwhile Sundowns didn’t have to break too much sweat in their 2-0 win at home against Baroka FC. Gaston Serino gave Downs the lead in the 64th minute.

Sundowns also became the first side to win 10 league games this season.