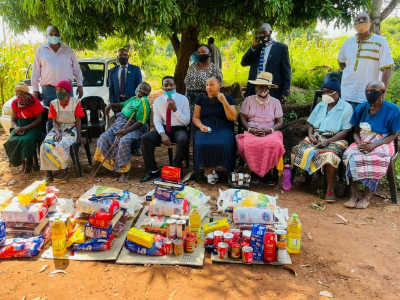 On Monday, gogo Mashudu Matamela didn’t know where her next meal would come from.

But today she and her family of four have food and electricity that will last them for more than a month.

Gogo Mashudu Matamela, 78, of Halukhwa in Thohoyandou, Limpopo and five other gogos were conned of their R1,860 grant money by a woman who took their Sassa cards while claiming to register them for food parcels.

The gogos went to local traditional leader Chief Takalani Tshivhase, and Scrolla.Africa published an article on Gogo Mashudu’s plight. After the gogos’ trip to Chief Tshivhase, the traditional council handed over food parcels to them. They also gave groceries and electricity vouchers to all the gogos.

Local businessman Takalani Ranwedzi donated more groceries and paid back the stolen money to the gogos.

“Without this money we are nothing. What we got today has restored our dignity,” said gogo Mashudu.

“I am so excited. What our chief and the businessman did for us will completely change our lives.”

Victor Takalani of the Takalani Royal Council said they were shocked after they learned of what had happened to the grannies.

“We decided to do something as a temporary intervention. We know that most families are dependent on grants and we could not make them wait for the next grant payment,” he said.

“We also do not want learners to lose out on their studies which is why we gave them electricity vouchers.”

He warned residents to be alert and not trust strangers but to refer all matters to the traditional office.

Takalani Ranwedzi, who is also a pastor said: “We do not have a lot of money but we could not pretend as if nothing had happened. We are donating the little we have to wipe their tears and keep their lives going.”