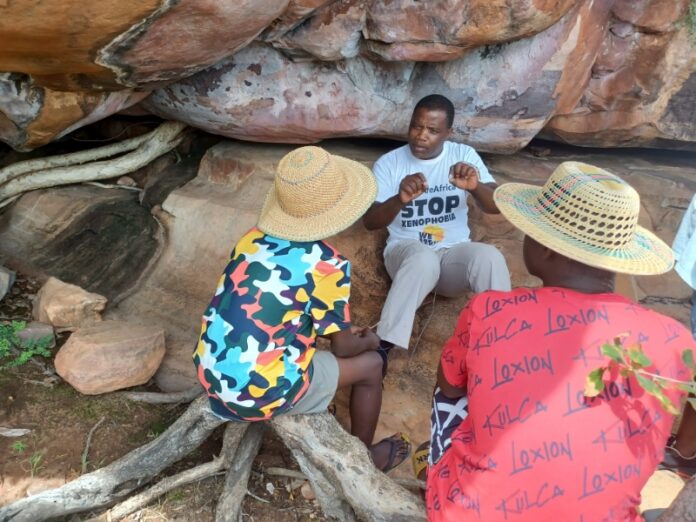 Deep in the mountains on the Makgabeng Plateau in Blouberg lives a mountain man who is the keeper of ancestral knowledge going back hundreds of years.

Jonas Tlouamma lives in these Limpopo mountains, which are home to over 630 known archaeological sites, including rock art paintings by the San, Khoi and Bahananwa. These peoples fled Botswana to come and reside across the river in the mountains just outside Bochum.

“These mountains were a safe place for the tribes that came to live here. Because they could see enemies approaching from far, they lived and thrived on the Makgabeng Plateau,” says Jonas, who knows the history of these mountains and passes the knowledge on to the next general in his village.

The mysterious rock formations on these mountains alone are a marvel. They were created billions of years ago when the Makgabeng Plateau was completely underwater.

In addition, there are the stories left by our ancestors on the mountains. The rock paintings describe ancient life, medicine, spirituality, coming of age ceremonies and food production.

The most notable drawings tell the story of the invasion of Paul Kruger to capture and arrest Chief Maleboho.

The Hananwa people were able to resist the invasion due to the strategic advantage given by the mountains. Eventually, Chief Maleboho gave himself up and was taken to Gauteng by train. There are giant trains and tracks drawn on the mountains to symbolise the event.

Jonas has studied all the rock art and gives tours to tourists as well as PHD students and business people. Although he is virtually unknown on the internet, he has helped many people succeed in their studies through his guidance and knowledge of the area.

The Makgabeng mountains are full of mystery and beautiful plant life where giant bilberry cacti grow in their thousands.

Text and media provided by @1000LimpopoSecrets