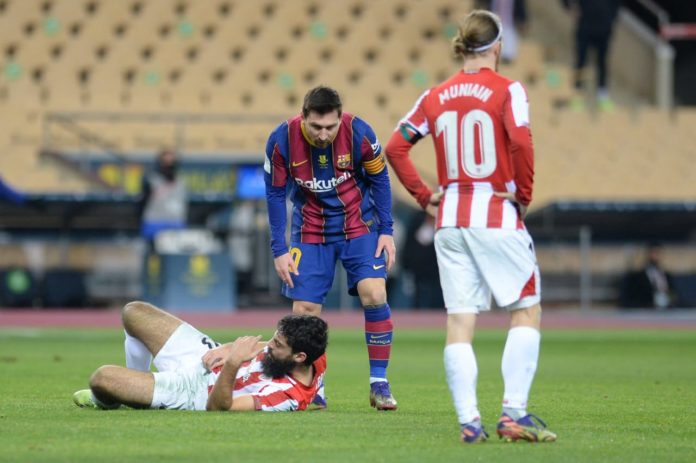 As he reaches the end of his legendary career, people are asking whether Barcelona captain Lionel Messi is losing it after his moment of madness landed him a red card for violent conduct on Sunday night.

Messi was given his marching orders for the first time ever in his club career after he was caught by VAR aiming a swipe at Athletic Bilbao player Asier Villalibre.

It was an off the ball incident but his moment of madness was caught by VAR. In that match Barcelona lost 3-2 in extra time to Bilbao in the Spanish Super Cup final.

Now he could find himself in more hot water with Spanish Footballing Body.

Messi’s season just keeps getting worse. It is understood that this week the La Liga review committee will sit to discuss what transpired in that match and should Messi be found guilty he could be banned for four matches.

In Article 56.8 of the rules explains that suspensions picked up in the Spanish Super Cup will carry on to the next domestic matches. This means Messi is set to miss Barcelona’s Copa del Rey fixture against Cornella and then one more Copa fixture if the Catalan outfit progress.

If Barca lose, though, Messi would be banned for at least three La Liga matches.

“It seemed to me a clear aggression from Messi. I put my body in the way, he got mad and he hit me in the face with his hand,”  Villalibre told reporters after the match.

Messi’s future has been the source of constant speculation recently, and it remains to be seen where he ends up at the end of the season, with his contract set to expire in June. The Argentine made it clear in the off season that he wanted out at the Catalans and he even offered to buy himself out of his contract.

Messi has now gotten red carded three times in his career. The first time was in 2005 in his Argentina debut against Hungary.

The second time was in 2019 once more with Argentina and this time against Chile at the Copa America. The third time was on Sunday.