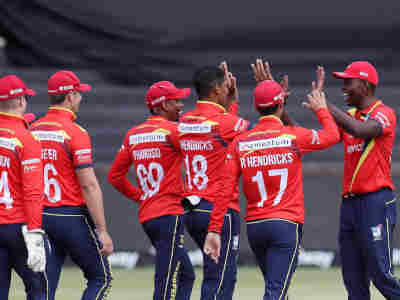 The Imperial Lions were crowned the champions of the Betway T20 Challenge following a four-wicket victory over Hollywoodbet Dolphins on Sunday.

The Dolphins won the toss and elected to bat in Durban, managing to post 107 runs for seven in 20 overs, with Robbie Frylinck top scoring for the KZN franchise with 30 runs.

Kagiso Rabada ripped into the Dolphins’ batting taking three wickets from his four overs and conceding only 12 runs. Sisanda Magala took two wickets from four overs with only 19 runs conceded.

Reeza Hendricks helped the Lions to easily chase down the 107 target to clinch the title with an over to spare.

Hendricks finished the tournament as the leading run scorer, with 257 runs, ahead of his captain Themba Bavuma with 256 runs.

Magala finished the tournament as the leading wicket taker ahead of the Titans’ Lungi Ngidi. Magala took 13 wickets and his teammate Rabada finished with nine wickets.

Rabada said he was satisfied with the way the team played and said it felt good to win the title for the Lions.

“I really wanted to play and be involved and find some good form. I also wanted to play for the Lions. I haven’t played for them for a while,” he said on the Cricket South Africa website.

“It’s amazing playing with my teammates. It’s a good environment to be a part of.”

The Gauteng franchise successfully retained the trophy, their second of the season, after winning the Momentum One-Day Cup tournament earlier this year.