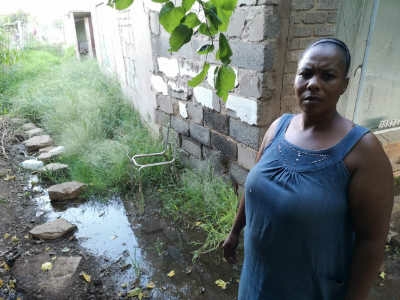 Nongazi Mthombeni fears the stench of the pools of sewage around her house will make her neighbours hate her.

For the past three months, Nongazi from Freedom Square in Mangaung, Free State has been pleading with the ward councilor to have the problem fixed, but her pleas have fallen on deaf ears.

Neighbour Sampi Mokhatli said she knew Nongazi was worried that she could lose her friends in the neighborhood.

“But this is not her fault. I know she is doing everything in her power to fix it. No one wants to live in kak,” she said.

“He said he would send his team but no one has come,” she said.

“Last week they passed my house. They could clearly see my problem but they ignored it.”

She said it’s tough to go to the loo.

“I can easily fall from the bricks we use as stepping stones and break my bones. I feel like a hostage in my own home because of the lack of service,” she said.

Ward councillor Matekane Nkoe said he has never received a complaint from Nongazi.

“I always tell residents to report directly to me and I don’t think Nongazi has done that,” said  Nkoe.

“I will send the team to investigate. I can assure you I attend to calls immediately. No sewerage call waits for more than two days without getting attention.”

Nongazi said she will wait for two days to see if the ward councillor will do as promised.