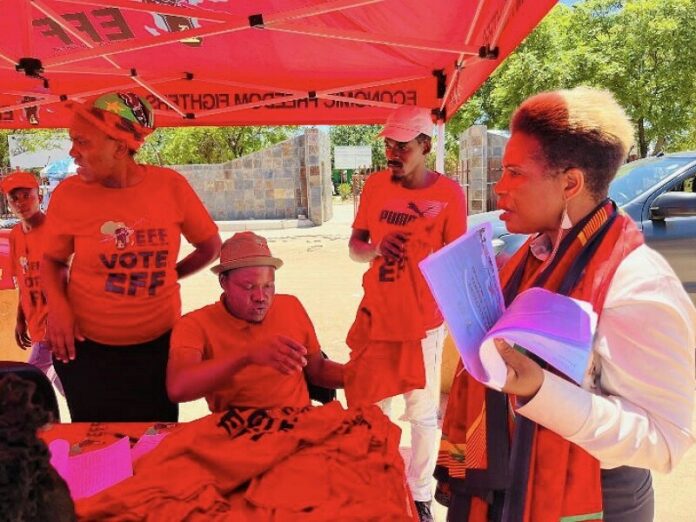 The EFF will gauge its strength in Limpopo, the home province of party leader Julius Malema, during two by-elections on Wednesday.

The by-election in Ward 10 in Polokwane Municipality – Malema’s home city – promises to be nail-biter, and the EFF has pulled all the stops to retain the ward.

The red beret poured everything into its campaign – including buying a Jojo water tank for the impoverished residents of Ward 10.

However, it remains to be seen whether this will pump back the votes the party is deperate for.

This ward belongs to the EFF and was up for the taking following the death of its councillor Ramokone Doris Photo in October last year.

The EFF has sent its troop Jacob Segodi Seshoka to defend the ward from the other contenders.

The ANC’s Maropeng Ramoshaba, ActionSA’s Mayinga Hlongwane, Tebogo Makwea from the Active African Christians United Movement, and Jackson Khoza of the Party of Action, all threw their hats in the ring for the ward’s top job.

The EFF hosted a rally on Sunday that addressed party MP Mbuyiseni Ndlozi ahead of the contest that promises to be a nail-biter.

Another election will take place in Ward 17 in Blouberg Municipality, Limpopo, that was up for grabs after the death of ANC councillor Sylvia Tlepyane last year.

The EFF believes Justice Maputla is the right man to win the ward from the ANC – which is represented by Sebolaishi Anikie Maputla, who is fighting to retain his party’s ward.

The turnout was 50% in the 2021 local government elections.

Another thrilling by-election will be held in the Eastern Cape in Ward 5 Mbhashe Municipality.

This ward is a strong base for the ANC, which opened up when a vacant ANC councillor died.

Pictured above: EFF ground forces were already on the ground on Tuesday ahead of the by-elections today