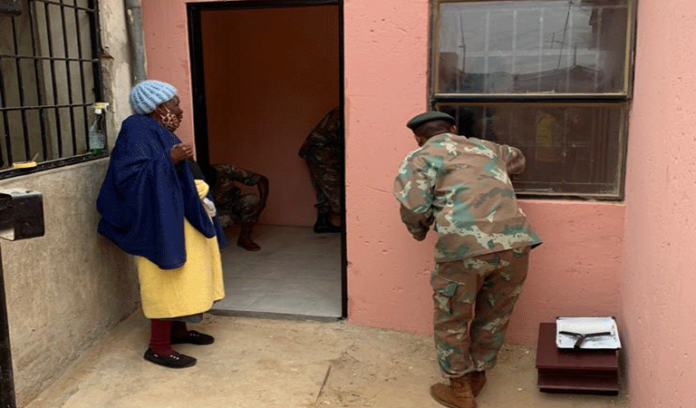 We are used to seeing them with machine guns and combat gear.

The soldiers from Operation Notlela are pitching in to assist the group“30 Strong Voices of Alex”with its work in the community.

On Saturday the group handed over a house they refurbished after it had been destroyed by fire.

The group was on the ground in Alexandra during the lockdown, assisting the police and the army to keep people off the streets.

Group spokesperson Simon Alaska Sekhitla told Scrolla.Africa that their organization had helped control the spread of Covid-19 in the township and was now helping those who had lost hope or were desperate to get back on their feet.

He said with the help of donors and the soldiers, the group rebuilt a two-roomed house for Rosina More, her daughter and two grandchildren who had become homeless after a fire.

Simon said the group’s members included electricians, plumbers and painters who had all turned up to assist.

Captain Tshepo Mokoka, Regional commander of the SANDF, said soldiers from Operation Notlela assisted the 30 Strong Voices of Alex organisation with the renovations in Alexandra.

“We painted the walls and cleaned the yard.

“We have been working with the men and women of 30 Strong Voices of Alex since March when the government introduced the level five lockdown.”

The lead donor of the 30 Strong Voices is Muneer Adamjee from the Adamjee Foundation.