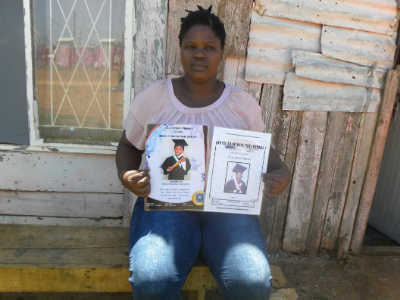 Nomthandazo Rhwayibana is seeking compensation from the Nelson Mandela Bay Municipality after her two children died after allegedly eating toxic foodstuff from an illegal dumpsite.

The dump site is about 100 metres from their shack homes in NU30, Motherwell.

“I was told to use the money from my funeral policy and the municipality would repay me for the expenses,” she said.

“I had to borrow money to top up the policy as it was not enough to cover all the costs. I never heard anything from them afterwards. I want that money repaid.”

Nomthandazo said it was because the municipality did not provide a secure dumping place that her children died. Had there been a skip bin or had the site been fenced children could not have accessed it. There was also no playground for children where they resettled us.”

A resident confirmed they are still throwing away their rubbish at the site.

“We have no choice but to quickly burn the refuse before it accumulates so that children will not find the hazardous material,” the resident said.

NMB Municipality spokesperson, Mamela Ndamase said the City assisted one family who did not have a funeral policy after they applied for assistance.

“The other family opted to cover their own costs as they reportedly had a funeral policy. They did not apply for assistance as the City’s processes dictate.”

Nomthandazo is adamant officials told her they would reimburse her.

She promised to visit the new Executive Mayor, Nqaba Bhanga with the invoices from her funeral parlour.