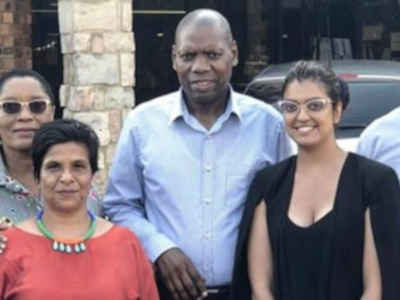 Health Minister Dr Zweli Mkhize’s personal spokesperson and his former private secretary have made Covid-19 cash as paid consultants working for a communications company hired by the government, the Daily Maverick reported on Tuesday.

Digital Vibes, a small company based in KwaZulu-Natal, employed Tahera Mather (above, red top) and Naadhira Mitha (above, right) shortly after it was awarded a communications contract from Mkhize’s department.

Since March 2020, over R82 million worth of communications contracts have been awarded to Digital Vibes.

Mather is Mkhize’s long-term personal spokesperson as well as a close family friend. Reportedly, their relationship goes as far back as the 1990s, when Mkhize was an MEC for Health in KwaZulu-Natal.

However, the Department of Health has insisted that this does not suggest a conflict of interest.

Likewise, Mather told the Daily Maverick, “I note that some of the questions you pose, insinuate corrupt behaviour by myself and others. These insinuations and allegations are defamatory and damaging of me and others.”

Digital Vibes’s links to Mkhize go back long before Covid-19, and even before he was Minister of Health.

When led by Mkhize in August 2018, the Department of Cooperative Governance and Traditional Affairs (Cogta) awarded a R3,9 million contract to the company for communications services.

In the same month, Mather was handed a paid consultancy job at Digital Vibes.

Shortly after Mkhize was appointed Minister of Health in May 2019, Digital Vibes was awarded a contract by the Department of Health. Here, it was hired to assist the department’s drive for National Health Insurance (NHI) roll-out.

Again, Mather was hired by the company as a paid consultant, while Mitha was also hired at this time.

In March 2020, the department was forced to focus on the global battle against Covid-19 and Digital Vibes’s role expanded to cover efforts to tackle the pandemic.

Mather and Mitha remain as consultants for the company. This means that the two government officials have pocketed emergency Covid-19 money.

Over just nine months, over R82 million has been handed to the obscure communications company. This money has been spent on the “printing and distribution of 35 million pamphlets” and “Covid-19 related consulting services”, reports the Daily Maverick.