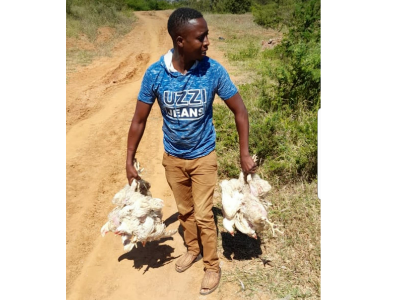 The residents of Vhembe in Limpopo have been blessed twice this year.

Last month residents found locusts were all over the district, which they harvested and even made a few rands out of selling the surplus.

This week there was more manna from heaven when residents of Dididi outside Thohoyandou in Limpopo woke up to hundreds of chickens wandering in the bushes.

Soon after news of the chickens became known, the village turned festive with meat everywhere.

The chickens are both broilers and layers.

Residents were seen scrambling to capture as many chickens as they possibly could.

A local resident who preferred anonymity said the chickens were like Christmas to them.

“We are a very poor community and meat is an expensive luxury for most of us.

“When I heard that there were chickens in the bush I dashed there with my children and we managed to get 15 of them,” she said.

The windfall has not only been good news for residents, but also for men who are involved in the brick making industry along the Nandoni Dam.

Samson Ndaba and others who make clay bricks for sale in the area where the chickens were found said they were very excited to have that much meat at their disposal.

“We have been working here for a long time and nothing of this nature has ever happened. We are having a feast here I can tell you,” he said.

Ndaba was one of the first to spot the chickens and together with friends they managed to catch more than 25 chickens.

“I have never eaten so much meat and my wish is that they keep on appearing,” he said.

He said they risked crocodiles to catch fish at the giant dam and the free chickens came as a relief.

“Since Monday we received reports of the chickens in the village and we are investigating the source of these many chickens,” he said.