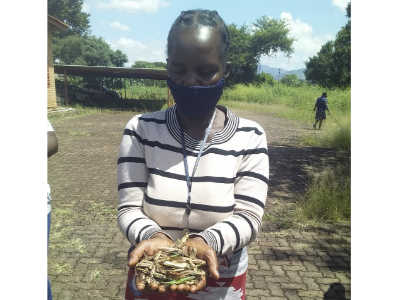 The recent floods in Limpopo have caused havoc, but for some rural communities it is a blessing in disguise.

The rains have brought huge swarms of locusts – a bountiful source of proteins – and money!

On any given day, groups of women head into the nearby bushes in search of the tasty insects, filling their bags and returning with enough for themselves and their relatives.

Rendani Madadzhe of Sibasa, Thohoyandou, an unemployed mother of two kids, said her kids have not gone to bed without a proper meal and she is making a killing selling the locusts.

“From the little we get from children’s grants we are only able to buy the basic necessities like mielie meal and soap. Meat is a luxury we can’t afford,” she said.

She said they use torches and on a good evening they can fill up to five kilos which is enough to feed her family and the rest she sells.

Locusts have been a staple food in most rural communities in Limpopo but have disappeared since urbanisation.

They are easy to prepare as they can be dried, smoked or fried.

Dorothy Makhesa of Vhufuli, a single mother of four children, said they have been eating  locusts for almost a month now.

“On a good day I harvest around 2kg. They are tasty and healthy and they don’t have fat,” she said.

Dietician Sirah Dubois said locusts swarm in huge numbers and can travel great distances and cause considerable damage to crops.

“However, in many African, Middle Eastern and Asian countries, locusts are considered a delicacy and eaten in abundance,” said Dubios.

“Locusts are an excellent source of protein and contain a variety of fatty acids and minerals. Locusts are an important food source in many countries.”