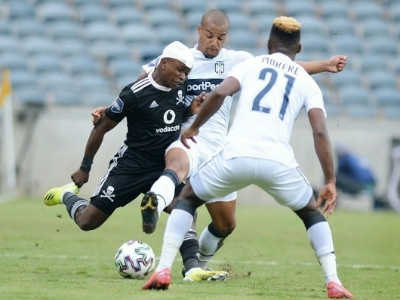 Siphesihle Ndlovu is living proof that hard work pays off.

The Orlando Pirates midfielder is making his presence felt and has already bagged two man of the match awards this season – a far cry from last season when he joined the Bucs from Maritzburg United and coach Josef Zinnbauer saw him as surplus to requirement.

Things were not looking good for the midfielder when last year’s January transfer window opened. Suffering from a lack of game time, he was linked with a loan back to his former club Maritzburg United, but Pirates were hit with several injuries and suspensions, preventing the move from materialising.

Ndlovu was used mostly out of position to cover for absent players and ended the season playing less than 15 matches in all competitions.

But that’s ancient history. His two man of the match awards this season both came against Cape Town City, first in the MTN8 and on Tuesday in the DStv Premiership.

“Whatever happened in the past happened. What is important is that I’m there for the team. I’ve worked hard and I’m always positive. That is paying off now,” said Ndlovu.

On Tuesday Ndlovu played most of the match with a head injury after a collision with his teammate Thabang Monare. Monare was taken to hospital for observation after suffering concussion and was discharged the same night.

Ndlovu and Monare are expected to play a major role in helping Bucs qualify for the CAF Confederation Cup. On Sunday Pirates visit Jwaneng Galaxy from Botswana in the first leg play-off at Botswana National Stadium at 3pm. The return leg will be at Orlando Stadium next Sunday at 5pm.