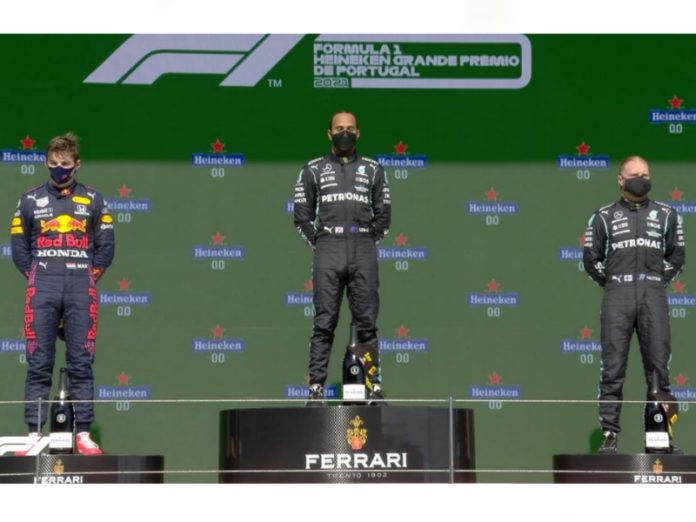 Defending World Champion Lewis Hamilton won the Portuguese Grand Prix for a second year in succession and in the process set another record.

Hamilton led the drivers’ championship for the 123rd race and has scored for the 150th time as a Mercedes driver. He has only failed to score nine times since joining the team in 2013.

“It was a tough race physically and mentally. I didn’t get a good start and lost out at the restart but it was a great result in the end,” Hamilton told F1 Twitter.

The British driver came from behind to pass Verstappen on the outside when Verstappen went to the inside on the very long straight of the Portimao circuit.

Hamilton leads the drivers standing with 69 points, Verstappen is second on 61.

Mercedes hit triple-figures to lead the team standing with 101 points, with Red Bull Racing team not far behind with 83 points going to Spain this coming weekend.

Hamilton, Verstappen, and Bottas have now shared the podium 15 times – more than any other trio in F1 history.

Fans voted Red Bull Racing driver Sergio Perez the driver of the day after he finished in fourth position.

Up next is the Spanish Grand Prix at Catalunya this Sunday.