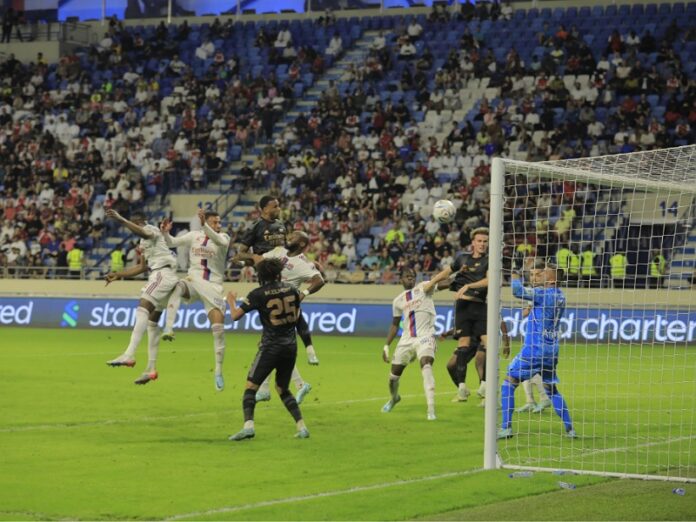 Arsenal beat Lyon 3-0 as the Dubai Super Cup kicked off just an hour’s flight away from the global attention that the Fifa World Cup holds.

Just as the world readies itself for the quarter final stage in Qatar, the country’s neighbours, the UAE, will get to see the best of the rest live in action, courtesy of the mid-season Dubai Super Cup.

Apart from Arsenal and Lyon, the competition will also give fans in Dubai the opportunity to see Liverpool and AC Milan in coming days.

With some interesting rules and loads of happy faces cheering on their favourite players, the games will all take place at the Al Maktoum Stadium, home of Al Nasr SC.

The opener between Premier League leaders and the well known French side was a dazzling affair, with Mikel Arteta giving game time to a host of big names and some promising youngsters as well.

The Arsenal boss spoke to Scrolla.Africa in his match day press conference, saying that the warm weather on offer in the Middle East present perfect conditions for the players as they prepare for the second half of the Premier League campaign.

“I think it’s always easier coming this way, because the players are so happy to see the sun wear some flip flops and be training in better conditions,” he said.

“It will probably be tougher when we get back to London, especially with the way the weather looks now, but we are so used to it. We train there every day and we are so lucky. We don’t have the weather, but we have so many other things.”

The first half went by at a rapid pace, with the Gunners dominant in front of goal. Gabriel got the lead for Arsenal from a Martin Odegaard corner inside 20 minutes before Eddie Nketiah made it two after the half hour mark.

Fabio Vieira then capped off an excellent first half with an absolute screamer five minutes before the break.

Despite a goalless second half, the near 8,000 fans in attendance would get their money’s worth as the tournament rules means that regardless of the result, a penalty shootout will take place at the end of each match.

The Gunners won that as well, with 20-year-old Karl Hein the hero in goal, making four saves to give his side a bonus point in the league standings.

Both sides each have a game remaining, with Arsenal set to take on Milan and Lyon playing Liverpool before the Reds and the Italians collide in the final game. The team at the end will lift the Dubai Super Cup.

Pictured above: Arsenal vs Lyon live in Dubai