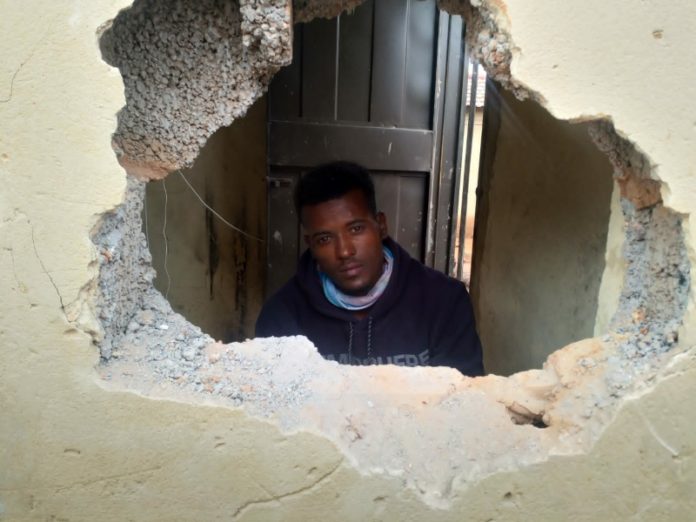 It was like a scene straight from a Hollywood action movie!

The thugs drilled a hole through the wall of the spaza shop, but they were discovered while inside the shop.

The men had jumped the fence, into Sizakele Mthembu’s yard and worked from there to tunnel into the next door spaza shop.

But Sizakele saw the men and called an off-duty officer who lives a few houses away.

“I was scared the bullets would come through into my house and hit me or my children,” said Sizakele.

“As I got to the hole I saw a man trying to come out,” Radebe told Scrolla.Africa.

“I shouted, telling them to stay where they are and put down their guns but then a bullet came through the hole and I returned fire.”

Radebe said he was alone while another woman went down the street, blowing a whistle to wake up the neighbours.

Sergeant Radebe said the shooting continued and he shot one thug in the leg. “While we exchanged fire, one of them shot his friend in the arm,” he said.

In the meantime, community members, armed with pick handles, sjamboks, stones, hammers and any other weapons they could lay their hands on arrived.

Inside the shop, a desperate hand-to-hand battle was going on between the shopkeeper and the thugs.

“I was using bottles of cold drinks as weapons,” said the shopkeeper, Brihanu Malito.

“The suspects were also swinging at me with anything they could find in the shop like bottles, bars of soap and bags of maize meal.”

But then the tide turned against the thugs when a community member passed a pick handle to the shopkeeper who hit one of the thugs on the head.

In a statement, police confirmed that seven suspects were arrested and one of them was rushed to hospital after sustaining injuries.