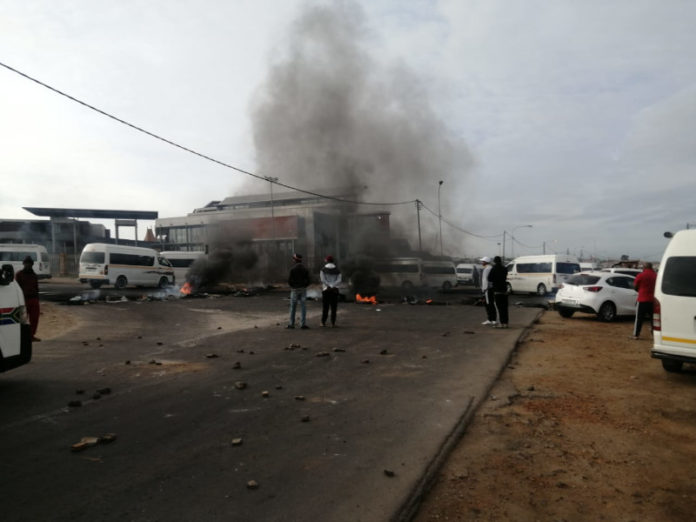 For three days, gatvol taxi drivers have brought dozens of Gqeberha townships to a standstill in protest for Covid-19 relief grants.

The strike escalated on Wednesday morning when Norwich Taxi Association also shut down its routes with burning tyres in solidarity with two other associations. On Wednesday night, eight Algoa Bus Company buses were torched at the depot.

The strike started on Tuesday morning, when taxi drivers from Uncedo Taxi Association and Port Elizabeth District Taxi Association shut down the main roads from the different townships to the Gqeberha CBD.

School children were left stranded, thousands of workers could not reach their workplaces and two cars were torched due to a taxi strike over unpaid Covid-19 relief grants.

A Toyota Quantum from a private company and an Uber were torched on Tuesday while a truck carrying zincs was looted. Seven taxi drivers were arrested for damaging infrastructure.

Bulela Sumpa, who works as a taxi driver, said, “We are just money making machines for these greedy and corrupt taxi bosses. But when they have to pay us we have to be violent.”

Algoa Bus Company suspended its services which led to the closure of the schools in the townships.

“I am five months pregnant and I walked from Veeplaas to Old Uitenhage Road to try and catch a taxi,” she said.

“I am desperate because we were advised to find our own transport. If we are absent, that is regarded as a failure.”

Grade 7 learner, Yonela Sapula, from Cebelihle Primary School said: “We are going home because teachers did not pitch up because of the strike.”

Asavela George from Zwide, who works in Korsten said they can’t even hire private cars.

“The taximen doesn’t want to see more than two people in a car. I work in a retail shop and I don’t get paid if I don’t work.”

Colonel Priscilla Naidu confirmed the bus incident: “At about 9:05pm a total of nine buses were set alight and completely destroyed at a depot in Motherwell. It is alleged that while the security guard was conducting his routine patrols around the depot, he noticed a bus on fire. He ran to get assistance and by the time he returned, other buses were burning. No injuries were sustained. The estimated value of the buses is R12 million. A case of malicious damage to property is under investigation.”