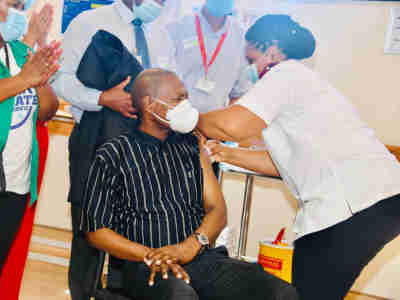 Minister of Health Dr Zweli Mkhize announced on Monday that the government aims to vaccinate 1.1 million people by the end of March. Dream on, we say.

Mkhize tweeted that South Africa will “ramp up its vaccination programme”.

Twelve days have passed since the country commenced its vaccine rollout, when Mkhize himself was one of the first to be vaccinated.

Since then, the government has managed to administer 70,527 jabs to health workers across the country, at an average of almost 6,000 per day.

To achieve its goal, the government would have to administer an average of over 33,000 jabs every day.

When one takes into account the difficulties the country has already encountered on a significantly smaller scale, this is an optimistic goal to say the least.

The government has failed to keep its promises regarding the vaccine thus far, and faltered at almost every hurdle.

Since the beginning of the pandemic, Ramaphosa’s government has been mired in corruption allegations over Covid-19 spending, including allegations towards staff members of both Ramaphosa’s and Mkhize’s own offices.

When vaccines entered the global market in December, the government’s handling of the procurement process was chaotic. They first claimed to be reliant upon the Covax initiative, which would supply nowhere near enough vaccines to achieve herd immunity.

They eventually purchased 1.5 million doses of the AstraZeneca vaccine from the Serum Institute of India on 7 January. At this point Kenya had already purchased 24 million doses while Morocco had bought 67 million.

It was becoming increasingly clear that South Africa had neither enough vaccines nor rollout plans for when it did have them.

In the following days after the rollout finally began on 17 February, reports of chaos once again began to circulate. Footage of long and unorderly queues around hospitals across the country went viral.

And so we ask, if the government can barely handle administering 70,000 doses. What makes Mkhize think it can handle over a million?