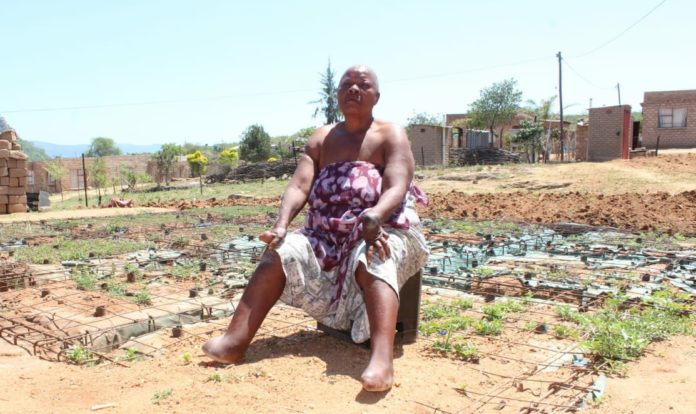 Disabled gogo Lillian Maake from Ga-Sekgopo village outside Modjadjiskloof in Limpopo was over the moon when building materials were delivered to her home soon after she had been awarded an RDP house in 2015. She thought her time of living in her dilapidated two-room house was over.

“But the builders installed steel rods and left. They never came back and the foundation was not completed. It pains me to see the floor like that.”

She said the rods are not safe as they are exposed.

She said the contractor later came back and took the building material to build another RDP.

She was told she was not supposed to get an RDP.

“If I was not supposed to get an RDP, why did they dig a foundation and deliver building material?” she asked.

When the gogo started using her disability grant to buy cement and bricks she was stopped and told the house would be finished.

“Another contractor came and started building another batch of RDPs in the village but mine was never finished. I have lost hope. I feel deprived of my right to own a decent home,” she said.

“I feel people are taking advantage of me because I’m disabled. I have tried my best to get help and now I’m tired.”

“Someone must be held accountable. We will not rest until the house is finished. We don’t understand why she was neglected,” said Ramaremo.

Limpopo Human Settlement spokesman Motupa Selomo said: “We don’t have records of gogo Maake, either as an applicant or as a beneficiary. It appears the contractor mistakenly went to her yard and dug a foundation and delivered material. When he realised he was with the wrong beneficiary, he stopped working and relocated the material to the approved beneficiary.”

He said they will dispatch officials working closely with communities in Ga-Sekgopo to profile gogo Maake for prioritisation to check if she qualifies for future allocation.