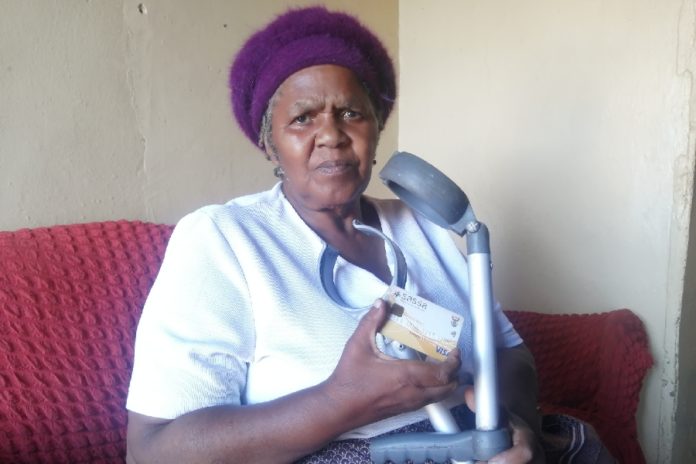 Disabled 76-year-old Gogo Nontuthuzelo Handile of KwaZakhele township in Port Elizabeth was left penniless and frustrated after being defrauded of R5,000 in her Sassa account.

The money includes the foster grants for her three grandchildren aged 11, 13 and 14.

She told Scrolla.Africa: “On Wednesday I went to Kenako Mall Post Office to withdraw my [Sassa] money. But to my surprise the teller told me the money was already withdrawn at the FNB ATM”.

“I told her that was impossible because I only withdraw my money at the Post office by using my fingerprint. I have never used my Sassa card because I forgot my pin number.”

Gogo Handile, pictured above, said this situation has left her and her grandkids with no food.

“The last porridge we had was in the morning on Thursday. This money was helping me to put bread on the table for my family of nine.

“I am stressed and I don’t know where I will get the money to buy food and electricity. My funeral policies also have not been paid. The tellers advised me to lay a charge of fraud at the police station.”

But she heard a different story from the police. Eastern Cape Sassa spokesperson Luzuko Qina said Gogo Handile needed to report the matter to the Post Office. “The client has been defrauded during the pin reset process.”