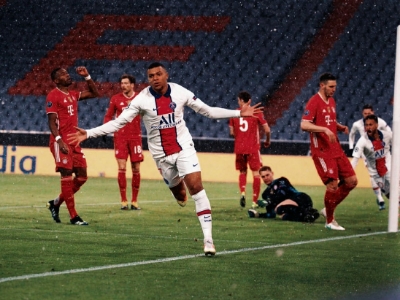 Kylian Mbappe continued his giant-killing spree after guiding Paris Saint-Germain to another famous win in the UEFA Champions League on Wednesday night.

PSG took a leap towards another semi-final when they defeated holders Bayern Munich 3-2 at the Allianz Arena in Germany in the quarter-final first leg.

This was Bayern’s first European defeat since March 2019 and it ended their 19-match unbeaten run in all competitions this season. It was also coach Hansi Flick’s first ever defeat in Europe as a manager.

And it’s all at the hands of Mbappe, who scored twice to make sure PSG avenged their last season’s defeat in the final. His goals gave his side that all important advantage going to the return leg in Paris next Tuesday.

Mbappe also single handedly destroyed Barcelona in the round of 16, scoring four goals to eliminate Lionel Messi and company.

Bayern coach Flick applauded his players’ fighting spirit after they came back from two goals down to make it 2-2 before Mbappe scored his second goal to steer the French side to victory.

Flick said: “I do not like to lose but I am satisfied with how we played. The team fought on the pitch for the entire 90 minutes. We need to be at 100% on Tuesday and decide this difficult game in our favour.”

Meanwhile in Portugal, Chelsea made things easier for themselves before the second leg next Tuesday at Stamford Bridge by beating FC Porto 2-0 to draw first blood in the tie.