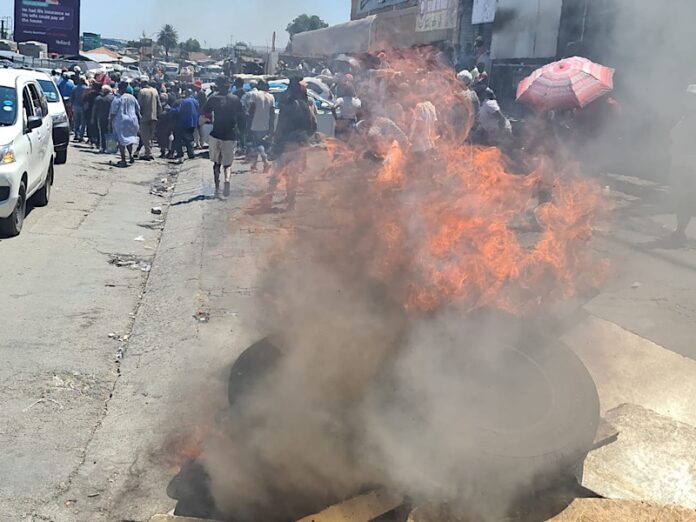 The top brass in the Gauteng police have gone on record saying they’re not supporting Operation Dudula.

The anti-foreigner movement has claimed on radio and in social media that the police have been helping them in their anti-foreigner marches and attacks on foreign businesses.

At least four Dudula operatives and one shopkeeper in Alexandra have been shot this week in clashes between Dudula and shop owners at the Pan Africa mall.

Dudula operatives took down and burned some stalls. They have called for all foreigners to go, and have been inspecting ID books.

Dudula leader Nhlanhla Lux Dlamini claims their operations are legal and supported by the police.

Before the Dudula Alexandra branch group started their operation on Sunday, a poster circulated on social media alleging they had the support of the metro police.

He told Radio 702 he did not sanction any activity where police participate in an operation when communities have taken the law into their own hands. “The police got the instruction from my office to say that for anybody who breaks the law of the country, we need to enforce the law.”

Lieutenant-General Mawela said when the operations started in Bara, Soweto, “It was brought to my attention that the police arrived and hawkers were already chased away and I said never again.”

The Johannesburg Metropolitan Police Department’s spokesman Xolani Fihla said the department distances itself from flyers and messages on social media with the name #AlexOperationFiyela, allegedly issued by the Alexandra Dudula movement.

On Monday this week, Scrolla.Africa spoke to Johannesburg mayor Mpho Phalatse who said the city condemns individuals who take the law into their own hands. She said the city doesn’t recognise Dudula.

Three shop guards accused of firing shots at Dudula members appeared in the Alexandra Magistrates’ Court on Wednesday. They were denied bail and will appear again next week for a formal bail application.

One of the shooting victims, Dudula operative Dumisani Nkosi said, “The pain was unbearable when I was wheeled into the local Alexandra Masakhane clinic.”

Currently, Dumisani has stitches on his eye and ear. One eye is completely closed and he is praying he will be able to see with it again.

But he remains convinced Dudula’s operations are justified. “The operation we conduct will help generations that will come after me,” he said.

He said that as soon as he can see properly again, he will join the marches until all foreigners leave South Africa.

“I am happy to survive and these are the scars I will show my grandchildren,” he said.

Meanwhile, the EFF’s Julius Malema lashed out at Dudula in Parliament. “Now, there are thugs today going around – they call themselves Operation Dudula – who are harassing innocent people, demanding proof of citizenship, and nothing is happening to them. These armed individuals are operating free because they know this country is run by cowards.”