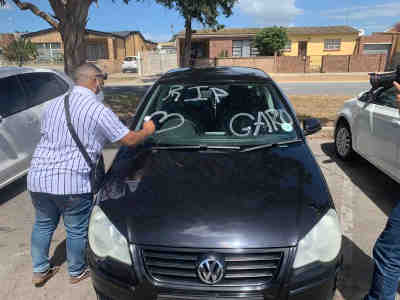 For the first time in two years, Boy Ncube will be able to pick up and drop off passengers in New Brighton, Port Elizabeth, after he was hijacked and nearly killed in 2019.

Ncube is one of the Uber drivers who have been hijacked and robbed by a gang of three criminals who terrorised e-hailing drivers and foreign-owned businesses.

Ncube welcomed the news that the well-known gang of criminals was arrested on Wednesday after they killed another driver last week.

“I believe police have caught the right people because most of the hijackings and robberies happened in New Brighton. I am glad that I can drive without fearing for my safety,” he said.

The gang’s latest victim was Garison Snayers who was found shot dead in his Suzuki in New Brighton on 17 February. Police say Snayers operated as an e-hailing taxi service for the owner of the vehicle.

She said Tembani set up the task team on Sunday, after the memorial drive-by which took place at the site of Snayers’ death. Three suspects, aged between 25 and 28 were arrested.

Acting Mount Road Cluster Commander, Brigadier Thandiswa Kupiso said the community are the eyes and ears of the police.

“The importance of a strong partnership between the police and the community cannot be overemphasised,” said Kupiso.

Ncube refused to have a photo taken of him or his car.