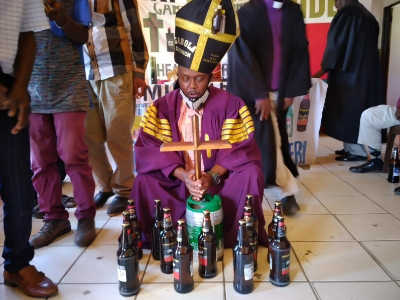 And the tavern owners, who are also archbishops of the church, have vowed to make the song the “national anthem” by playing it in their taverns and shebeens for people to accept the word of God through booze!

In front of its Zion beat, the song tells people to drink their favourite alcohol brands, to be merry all the time and never be ashamed.

Speaking to Scrolla.Africa on Sunday, Makiti says he has plans to record a music video to release alongside his 14-track album.

“Some people have not been able to visit our church premises. But giving them this merry and happy song in their houses and big screens will make them understand what Gabola church is all about,” he explained.

Makiti said the album was released last November in the midst of the Covid-19 lockdown.

“During the alcohol ban in the country, I had more time to think about how we could reach the masses. I managed to compose songs that people from different countries are enjoying and playing.”

He said now that the alcohol ban has been lifted, he will be able to record a music video inside taverns where people can be seen drinking and dancing to the song.

The church has an unusual attitude to alcohol, welcoming congregants to drink in church.

“We have seen a growing number of people who were judged by their colonial churches coming to us and enjoying the cold beer inside the church as they connect with their God.”

It also spreads the message by recruiting tavern owners, who “become pastors and bishops at the same time and their customers become congregants”.