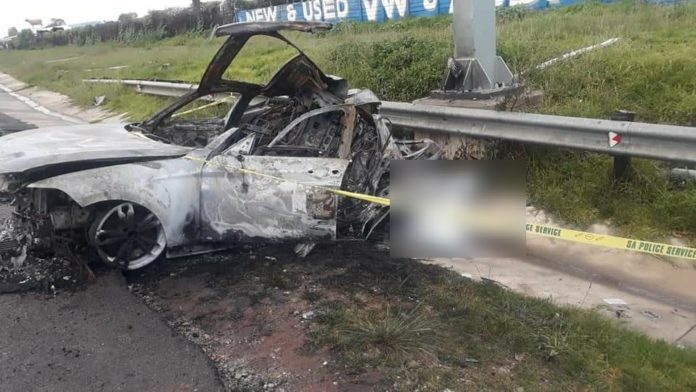 The death of Mamelodi Sundowns’ star defender Motjeka Madisha has left the small village of Ga-Madisha in Zebediela reeling in sorrow.

Madisha died in a car accident on Sunday morning.

The accident reportedly happened in Kempton Park around 02:00am when the 25-year-old’s white BMW caught fire after plunging into a steel board.

In 2016, Madisha made a name for himself in the DStv Diski Challenge formerly known as MultiChoice Diski Challenge, and he was promoted to the senior team the following season.

He rose to fame as a rock of Pitso Mosimane’s regular defenders at Sundowns where he made 80 appearances.

He was part of the 2016 Sundowns team that conquered Africa – winning the 2016 CAF Champions League – while collecting various local accolades too.

Before playing for Sundowns’ reserve league, Madisha represented M Tigers and the defunct Highlands Park between 2014 and 2015.

The late Bafana Bafana defender made 13 appearances for South Africa’s national senior men’s team where he scored one goal.

His death follows that of Sundowns defender, Anele Ngcongca, who was laid to rest on Friday after also dying in a car crash.

Nkgadimaa said: “reports that Madisha was at the gala event yesterday are false and reckless. Madisha was not part of the event or proceedings. Can we please allow the respective families to process necessary information with the relevant authorities”.