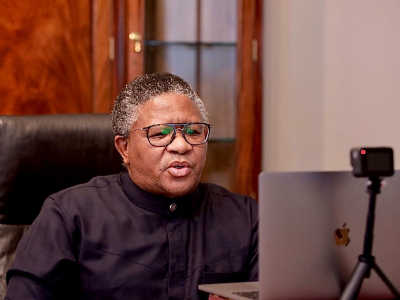 It appears that the Cyril Ramaphosa faction of the ANC has unleashed Transport Minister Fikile Mbalula to defend the president by fighting his detractors on social media.

This week Mr Fix, as he likes to call himself, took the fight straight to Jacob Zuma, saying the former president does not deserve the praise he is receiving from his supporters.

Mkhwebane has since opened a case of crimen injuria and contempt at the Brooklyn Police Station.

When Zuma’s Twitter supporters called Mbalula a “political prostitute” who benefited under Zuma’s regime and was now speaking ill of the former president.

“Am not a ‘political prostitute’ am saying stuff you don’t like, Big difference with Malusi Gigaba. Besides I’ve got files on you criminals go f***k yourself am ready for you.”

ANC deputy secretary general Jessie Duarte has indicated Mbalula should be disciplined by the ruling party.

In the absence of the ANC Youth League, factions battling for the control of the ANC are using bigger bulldogs to fight for their interests. This is playing out on social media.

Normally members of the ANC Youth League or the Women’s League are used by those with presidential ambitions to intimidate or embarrass their opponents.

These ANC structures – as well as the Umkhonto weSizwe Military Veterans Association (MKMVA) – claim to be autonomous. But they are clearly taking sides.

This is a strategy Jacob Zuma used in the run up to the ANC elective conference in Polokwane in 2007.

Also ironically, Zuma himself was once Mbeki’s bulldog – along with the late former ANCYL president Peter Mokaba – in the mid to late 1990s.

For months Ramaphosa’s efforts to unite the ANC and fight corruption have been undermined by the MKMVA, led by Zuma loyalist Carl Niehaus.