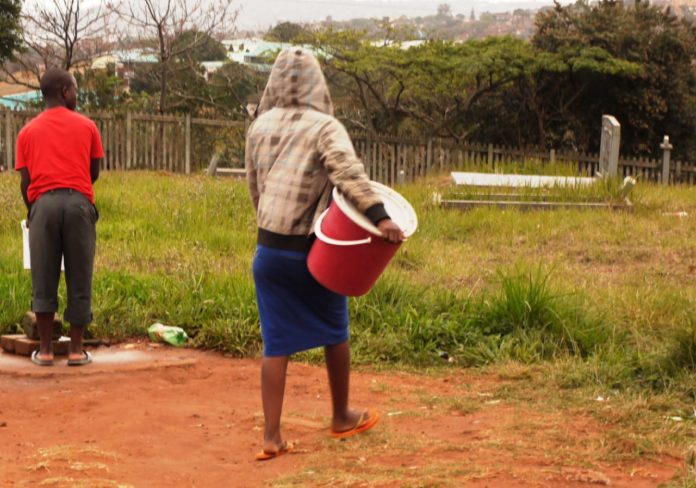 After a decade-long wait for clean running water, residents of Silver City informal settlement at Umlazi V section have resorted to fetching water from a tap inside Zwelethu gravesite.

Scrolla.Africa visited the gravesite and found women and kids queuing to get water.

Nomthandazo Sibisi, who was among the group, said, “I have got no option but to come here (gravesite) even though I’m scared because there are spirits of dead people here.”

She said she arrived at the informal settlement during the 2010 Fifa World Cup.

“I was hopeful then that we would get basic services soon, but now I have lost all the hope I had. It’s been more than ten years,” she said.

Sibisi said their hopes of having running water in their homes remain a pipe dream.

A resident Thami Ngubani said, “We have no running water at our homes that’s why we decided to use the tap inside the gravesite. We will use the tap until the municipality installs taps at our homes.”

He said they held a series of meetings with officials from eThekwini municipality that yielded no results.

“I don’t know how we would have survived if there was no tap at the gravesite,” said Ngubane.

A 16-year-old boy said, “I’m scared to come here (gravesite), but if my parents send me here to get water, I cannot decline. We are used to fetching water at the gravesite, although we cannot completely ignore that this is a place of dead people.”

A gravedigger, who’s employed by eThekwini Municipality and did not want to be named, said they allow people to get water because they’re desperate.

Ethekwini Municipality said they will investigate the matter.