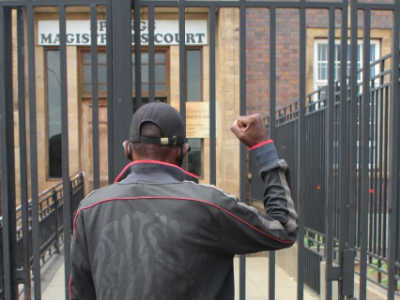 Joseph Mona, 40, the man who was forced to drink-up a jug full of human faeces, forced inside a manhole and left to die in December 2016 is happy the people behind this inhumane behaviour are behind bars.

“I can now sleep peacefully knowing that my racist abusers are finally behind bars and paying for the cruel and horrific things they put me through in the three years I worked for them.

“I was often beaten up and called names, especially the “K word” when they were not happy with my work.”

Farmer Harry Leicester, 57, his wife Maryna Leicester, 53, and son Chris Leicester, 31, were found guilty and sentenced to 10 years for attempted murder and two years for crimen injuria by the Springs Magistrate’s Court.

The sentences are set to be served concurrently.

Joseph was a general worker at their farm in Endicott in Springs.

He was forced to drink human shit from a jug and forced into a manhole for forgetting to switch off a sewage pump.

During the sentencing, magistrate Khensani Moila said that according to the medical report submitted to the court, Joseph is still traumatised from the incident.

“The doctor reported that he could have died from being inside the septic tank and there were still visible bite marks from the worms on his skin six months after the incident.

“What the victim went through is inhumane and cruel. Throughout the court hearing the family maintained that they were innocent and showed no remorse,” she said.

The family is set to apply for an appeal on 26 March.