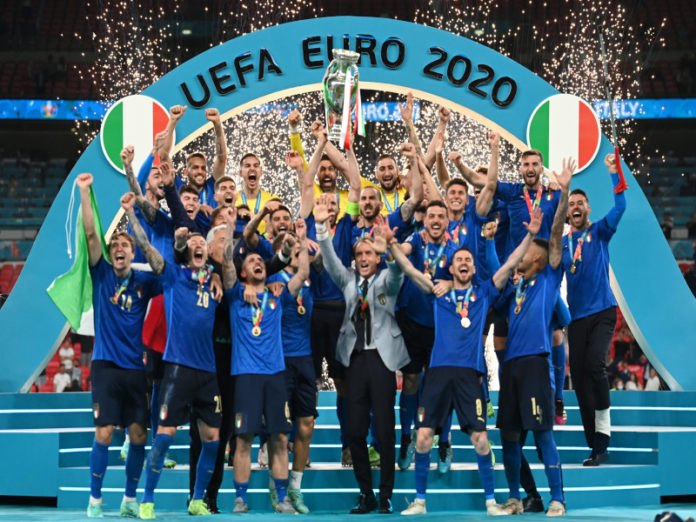 In the end it was down to a 19-year-old son of Nigerian parents to kick the penalty that would keep alive England’s hopes of claiming their first major championship trophy in 55 years.

He missed – and one’s heart went out to the weeping Bukayo Saka for a moment that will haunt him for the rest of his life – even as Italy erupted with joy at the deflected kick.

The miss ensured that Italy would defeat England 3-2 in penalties after a hard fought one all draw for the Euro championship  at Wembley.

England faltered at the last hurdle as the Italians claimed their second Euro title and their first since 1968. It was a game of two halves in which Roberto Mancini and his men came out on top.

Luke Shaw scored in the second minute to give the Three Lions of England the lead in a magnificent first-half display where they looked comfortable and confident. However, the Italians were allowed back into the game during the second half and took that opportunity with both hands.

Leonardo Bonucci equalised for the Italians and his side dominated the encounter but both teams unable to seal the deal as the game went into extra-time and a penalty shootout.

Coming into the competition, the Italians were hardly favoured, but Mancini has done a tremendous job in taking a failing side and claiming the top honour in European international football with an unbeaten run of 33 games.

As both teams headed into the penalty shoot out, Italy’s number two striker Andrea Belotti was blocked by England’s goalkeeper Jordan Pickford, which gave some hope back to the England team.

But then England missed three penalties in a row, including Saka’s, which handed Italy the crown and capped a truly sensational two years for the Azzurri who have picked themselves up after failing to qualify for the 2018 World Cup.

England however should not hang their heads in shame as they proved they have what it takes to be considered one of the best international teams in the world. They will go into the 2022 World Cup as one of the favourites under the mentorship of Gareth Southgate.