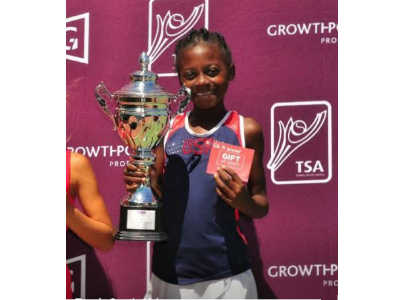 Worse than that, he couldn’t stand the image of his daughter, 10-year-old Emmly, and other kids her age, scrambling for food in the streets of Nkulumane, a township in Bulawayo where they live.

“My businesses collapsed under the harsh economic conditions. I started doing part time jobs and renting out my business equipment,” said Mkhululi.

But Mkhululi, a sports trainer and a man who does not easily take to defeat, decided to nurture Emmly’s athletic talent to prepare her for life as a sports star and to give him a job.

“Emmly gave us work. I played tennis at an early age after which I became a high performance certified coach.”

Mkhululi and Emmly travel to tennis tournaments while his wife,Tariro looks after Emmly’s five-year-old sister.

Emmly’s love for sport became clear when she played soccer as a three year old.

“She also loved swimming but the love for tennis emerged when she was six years old,” said Mkhululi.

“We decided to give her homeschooling so she could develop her skills.”

In a short time Emmly has amassed a number of medals. Most of her opponents are always a year or two older than her.

“A bright future awaits Emmly. Her skills are progressing in the right direction all the time,” said Mkhululi.

During a recent tour of South Africa, Emmly came away with a bronze medal in the Under-12 category in a tournament in East London, beating the favourite, Tamera Steward in straight sets. She lost in the semi-finals to Milan Swanepoel.

“I want to go all the way. I want to become a champion. I enjoy improving with every game I play,” she said.