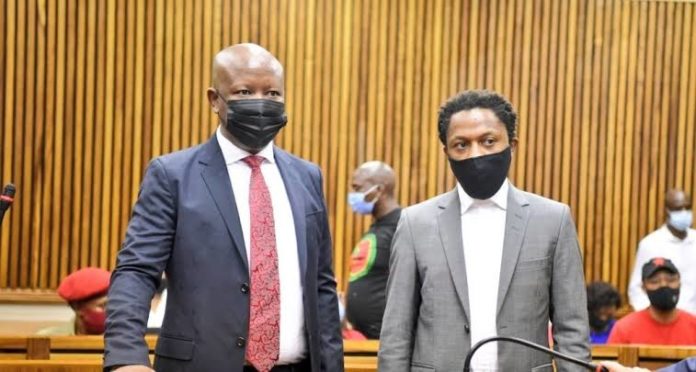 An altercation between the leaders of the Economic Freedom Fighters and an AfriForum lawyer at the Randburg Magistrates court on Thursday overshadowed the court case itself.

EFF President Julius Malema and member of parliament Mbuyiseni Ndlozi caused a scene that went viral and had Twitter users calling it a “high school drama.”

Malema and Ndlozi are facing charges of assault for allegedly pushing Col Johannes Venter after he denied them entrance to the cemetery at Winnie Madikizela-Mandela’s funeral in 2018.

But all people were talking about on Friday was the footage by the SABC that surfaced on social media showing the pair engaging in a heated argument with the AfriForum lawyer.

The trouble started when Malema accused the man of blocking their way to the bench where they were sitting before a short court break on Thursday.

“How do we pass here, you stretching your legs we can’t even pass here?

“What’s your understanding of passing?” said Malema before clicking his tongue as he moved past the man.

Ndlozi who was behind Malema joined in, saying “you are here to disrupt.”

“Wena, you are a disruptive maan,” said Malema in disgust, adding that they are not going to tolerate the lawyer’s ‘disruption’.

“We are here to get justice. What are you here for?” asked Ndlozi.

“Crook!” said Ndlozi as he went past him too. “You must not disrupt us. We’ll push you.”

The man’s response – “Are you threatening me?” – triggered Malema who had already sat down.

He got back up and went back to the lawyer saying “we will push you!”

“You are blocking the entrance here with your long legs,” Malema said with Ndlozi adding: “You were, don’t say you are not, liar. Liar.”

As he got close, police managed to direct the man to another bench in a different row.

“You see that’s how you move people,” said Ndlozi celebrating their victory.

EWN reported that once the case got moving Malema’s lawyer, Advocate Laurence Hodes, played video evidence to the court showing what looked like accreditation on the windscreen of their vehicle during the incident.

Venter is sticking to his story that he did not see the accreditation. The trial was postponed to March 2021.