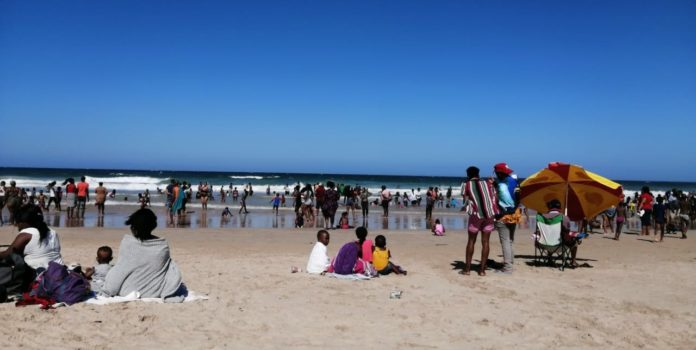 Eastern Cape Premier Oscar Mabuyane is asking President Cyril Ramaphosa to support a decision to close all Eastern Cape beaches and recreational parks to mitigate the spread of Covid-19 in the province.

Both the Nelson Mandela Bay Municipality (Port Elizabeth) and Buffalo City (East London) are known for attracting thousands of tourists to their beaches, parks and hotels during the festive season. But they are now the country’s Covid hotspots.

The impact of the localised lockdown in NMB is already hitting its economy hard. Both the formal and informal sector are feeling the pinch.

Sakumzi Nyendwana of Hand in Hand Visual Arts in Motherwell told Scrolla.Africa: “Hunger is already killing us. Tourists used to come all the way to our studio in Motherwell and buy our work. Since March we have not sold a single item.

“With my brother Msindisi we have a partnership with the surfers in Summerstrand and we used to get dollars during this time.

“Selling at the beach was our only hope to put bread on the table for our family of six. We don’t even get a social relief grant.”

Mvusiwekhaya Sicwetsha, spokesperson for the Premier, said the Provincial Coastal Municipalities leadership decided to close all beaches and parks. “We have realised these places pose a huge risk of becoming superspreaders.”

He said the decision was conveyed to national government with the hope KZN and Western Cape did the same.

The WC is not closing its beaches, and instead has beefed up its law enforcement agencies.

“We want this to be a national decision that would also cover other coastal provinces which have a relationship with us. There is a lot of traffic in between them. This would trigger more infections to other parts of the country.

“We would only announce its effect after we have met with the national government,” Sicwetsha said.

“In October, for facilities that were able to open, they ranged around an average of 18% to 25% and November was less than this for most.

“Bear in mind that break-even for these establishments is between 55% and 60%, so they are bleeding money.”

Ndamase said the region has already lost a number of guest houses that have been forced to shut down.

“In other tourism sectors such as tour guiding, many guides have not had a single guest since lockdown started,” said Ndamase.

Meanwhile, President Ramaphosa is due to address the nation on Monday night, and is likely to order new measures to slow the spread of the virus.