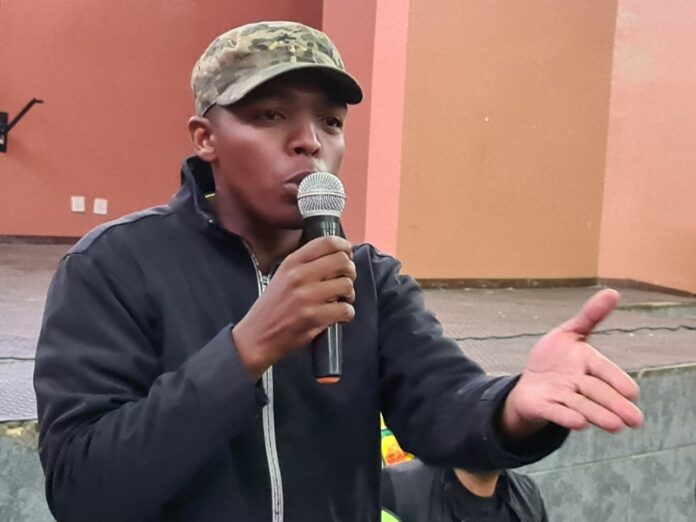 A power struggle for the control of mass community group Operation Dudula has forced its flamboyant leader Nhlanhla Lux out of its ranks.

The growing organisation with a presence in townships in Guateng, KwaZulu-Natal and parts of the Eastern Cape risks becoming a faceless vigilante group.

Nhlanhla Lux joined the anti-immigration group, when it was leaderless and coordinated its campaigns to resemble a credible community forum.

But now he has been forced out and told to put his energy into building his initial organisation, the lesser known Soweto Parliament.

On Monday, leaders of Operation Dudula and the Soweto Parliament held a joint press briefing at the Booysens Hotel in Johannesburg to clarify the future relationship between the two organisations.

Speaking at the briefing, Isaac Lesole who was facilitating the event, said they have asked Nhanhla Lux to get out of Dududla and focus on Soweto Parliament.

At the press conference, Nhlanhla Lux confirmed this but pleaded with the public to support Dudula with all the resources they had because he understood the movement’s mission.

“It was easy for me to migrate to the organisation pulling in my commanders and jumping on walls to clean our community. Dudula is very focused and fixed certain programmes but the Soweto parliament happens to be different,” he said.

Tensions between Operation Dudula and Nhlanhla Lux Dlamini rose when Nhlanhla Lux was seen in a video three weeks agp preaching about the importance of African unity.

In the video, Nhlanhla Lux said it was not important to call any black person originating from any part of Africa a foreigner. “Actually, the term foreigner, we shouldn’t be using it”.

Since the video emerged on different social media platforms there have been internal clashes between some members of Dudula and Lux.

Nhlanhla Lux has also been tweeting the same sentiment on his Twitter account telling his followers that the issue is not about all foreigners but illegal foreigners.

He said the mandate of Soweto Parliament is everything: “we rescue raped grannies, protest for electricity and fight criminals just to name a few,” he said.

Dudula Vice Chairperson Dan Radebe said as much as the public thought there was a huge fight between them and Lux, it was a mere misunderstanding.