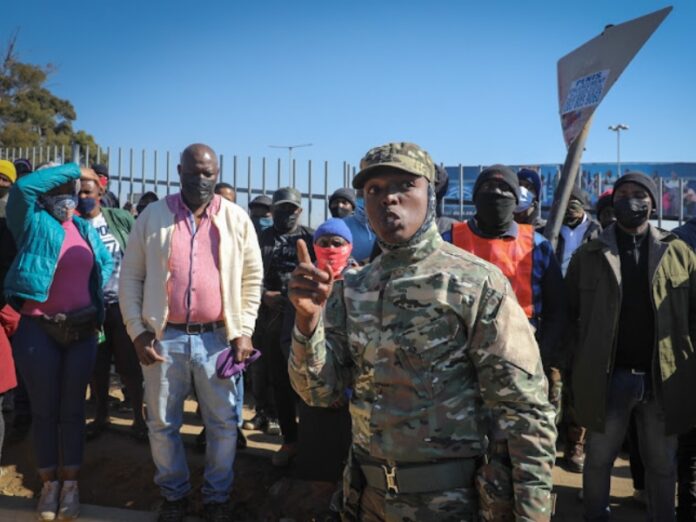 This is how it starts.

Politicians and activists whip up hatred, while pretending that their activism is driven by concern for the poor.

Vulnerable citizens – crushed by poverty and desperate for jobs – get swept along and used as props in staged “events”.

Vigilante groups with self-important names take the law into their own hands and start bullying business owners and ordering foreigners to leave.

Messages of hatred spread on social media and WhatsApp groups.

Foreign-owned businesses are attacked, burnt, and destroyed, their belongings stripped and looted.

Soon, widespread ethnic violence takes over, targeting mainly the poor from other African countries – and the security forces struggle to put out the flames.

We have been here before.

In 2008, 62 people were killed in the biggest upsurge of xenophobic violence this country has seen.

There have been further eruptions, such as in 2019.

But today we are on the edge of an even more dangerous situation.

Inequality, poverty and unemployment have worsened.

People are looking for someone to blame.

But our failure to progress as a nation is not because of migrants.

It is due largely due to bad governance and looting by state officials and politicians and a global pandemic that has ravaged the economy.

On Sunday a group of concerned civil society groups wrote an open letter in the Daily Maverick, calling on politicians to stop fanning the flames of xenophobia with their lawless acts.

“The flagrant disregard for the human rights of migrants, the rule of law and the Constitution is something that requires immediate intervention by law enforcement,” they wrote, warning of the “slippery slope towards accepting and normalising vigilantism”.

Yes, we need to fix the immigration system, which has fallen prey to the cancer of corruption.

And we need to rebuild the rule of law; every country has a right to police its own borders.

But at this delicate moment, is it too much to ask our politicians to stop playing with fire by scapegoating foreigners and exploiting the justifiable anger and despair of our youth?

As public representatives, should they not rather be finding ways of mobilising our state institutions, our businesses and our communities to grow the economy, to create jobs and to offer the prospect of a better life for all?

Or have they fallen so far that they are prepared to let the country burn down if they believe they can benefit from it?

Instead of more jobs, the desolation that they will leave behind will lead to the shutting of businesses and add to the army of unemployed as the country descends into chaos.

And the rest of the world and the African continent will shake their heads and say: What the hell happened to South Africa?