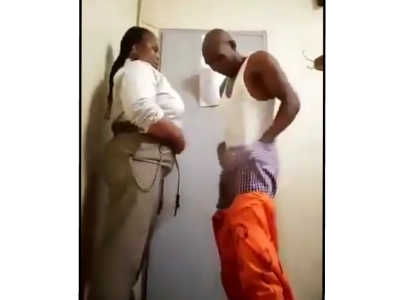 The Department of Correctional Services is officially appalled, embarrassed and gutted.

For those who are uncertain, Departmental spokesman Singabakho Nxumalo was very specific.

“Sexual activities between inmates and correctional officials are shameful incidents that can never be described as what is expected of our officials,” he said.

The video to which he’s referring is very explicit.

The prisoner has placed a recording device in the room and the on-duty warder in uniform is clearly also conscious of the device.

In the video, the prisoner and the warder are seen touching and kissing before the woman, helped by her clearly excited lover, unbuttons and pulls down her trousers.

Without using a condom the man penetrates her from behind. The woman carries on moaning throughout the act.

Finally, the man in an orange prison uniform wipes himself with a white tissue before kissing her goodbye and grabbing his recording device.

In a statement released on Tuesday, Nxumalo said the department is taking strong action against a correctional official for an alleged sex act with an inmate.

“A video with scenes of alleged sexual activity between an official and an inmate at the Ncome Correctional Centre, KZN, has left the Department appalled, embarrassed and gutted,” said Nxumalo.

“The officer involved has been identified and she will be subjected to a disciplinary process with immediate effect. Disciplinary measures have also been instituted against the inmate.”

He said correctional officials are expected to abide by a code of conduct, and despicable acts of sexual activities with inmates shall never be tolerated.

He appealed to those in possession of the video to stop sending it around.

In January, the department said it was installing body scanners at identified correctional facilities within six management areas in an effort to clamp down on smuggling.

Justice and Correctional Services Minister Ronald Lamola said the body scanners were introduced after an official was caught at St Albans Correctional Centre in the Eastern Cape smuggling contraband.