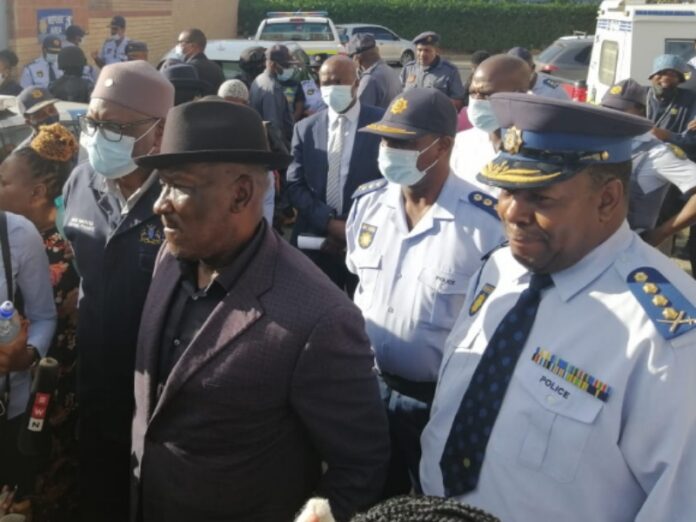 However, the jubilation that met this news was short-lived – as crowds deserted Cele’s speech when they heard that Operation Dudula leader Nhlanhla Lux Dlamini had lead an impromptu march against undocumented foreigners.

Protesters gathered early on Wednesday to demand greater protection from the police, following a recent spate of murders in the Johannesburg township.

The police minister arrived early in the afternoon to make a speech in front of protesters at the local police station. He was accompanied by the newly appointed national police commissioner Fannie Masemola and MEC for community safety Faith Mazibuko.

Arriving with them was the TRT, a tactical branch of SAPS, whose presence in the township residents have demanded for the past two years.

However, just as Cele was set to address the crowd, news began to spread that Dlamini had pulled up just a few streets away with other members of Operation Dudula.

Soon after one person spotted Nhlanhla in his car, as he drove into the nearby taxi rank parking lot, the crowd swarmed him.

The crowd, which had arrived to hear the minister and his delegates speak, deserted them to join Dlamini.

A few streets away from the police station, Nhlanhla stopped and addressed his supporters, asking them to maintain high discipline.

Many community leaders who spoke to the media blamed foreigners for committing the crimes in the troubled township.

Maki Ramogopa, 58, said more than 15 people have died in March alone, after being shot at, stabbed or hacked with a panga.

She blamed the police for not doing enough to protect the citizens, who she believes are being killed by foreign nationals.

“We don’t want the undocumented foreigners here. Police must arrest all of them and deport them. They are the one who commits the crime in our township,” she said.

Addressing the media, Minister Cele vowed that the ministry will address residents’ long-standing grievances in dealing with crime in the township.

“What I will concede here is that we did not manage and sustain the project we had started,” he told the media and residents.

“It is on that score that what we have announced here is that we are coming back on Friday to have a program going forward ‘how do we sustain things that we have agreed?’

Residents accused Minister Cele that he promised them that the ministry would deliver more TRTs to deal with soaring crime in the area.

Minister Cele said the national commissioner will bring extra special units of TRT, POP, metro police, and a special detective’s team to deal with the outstanding and cold cases.