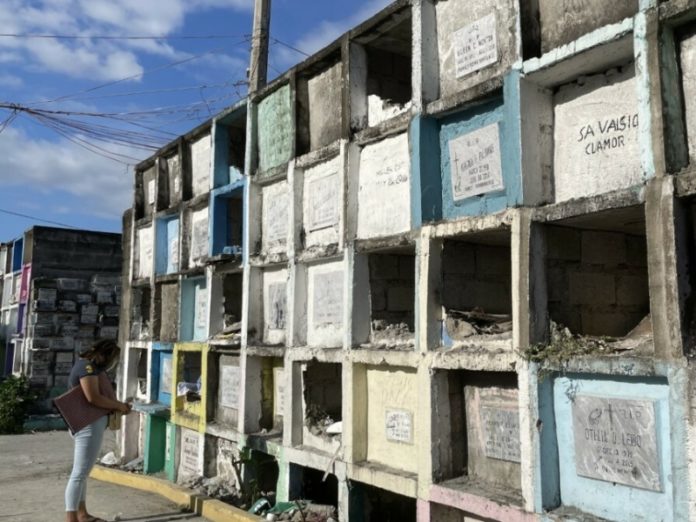 As Rodzon Enriquez’s skeletal remains are removed from their tiny concrete tomb, his mother can only stand and watch.

Aside from murdering those who most countries would consider to be mentally ill, the campaign has been widely condemned for largely targeting the country’s poor.

“If you know of any addicts, go ahead and kill them yourself as getting their parents to do it would be too painful,” Duterte told the public as soon as he was sworn into office in 2016.

After being shot to death by police in his sleep, Rodzon’s remains were placed in a coffin-sized tomb in an industrial cemetery in Manila, the country’s capital.

He, along with many of the tens of thousands who have fallen victim to Duterte’s War on Drugs, was placed in a crowded “apartment” tomb for the equivalent of R1,460.

But that price only buys a family a space in the cemetery for five years. Now, just over a month after the five-year anniversary of the beginning of the War on Drugs, a crisis is looming.

Many of the families will not be able to afford another lease, and they will then be left in the traumatic situation of being stuck with the remains of their deceased relatives.

“I wanted to have him at home – even if his physical body is no longer here, I know he’s still there,” said Corazon of the ashes she plans to keep until another location is found.

The grieving mother said that her son was a fishing port worker who took methamphetamine in order to stay awake during overnight shifts.

To tackle the crisis, one Catholic charity is trying to help families who cannot afford the lease by having the bones of the deceased cremated and buried in a columbarium.

The project is being spearheaded by Father Flavie Villanueva, a vocal critic of Duterte. He anticipates that thousands of bodies will require a “dignified” resting place in the years to come.

“It’s already too much that you lose a loved one – should you also lose his remains?” said the priest, who is currently working night and day to raise money for the project.

International Criminal Court prosecutors have requested a full-blown investigation into the drug war.