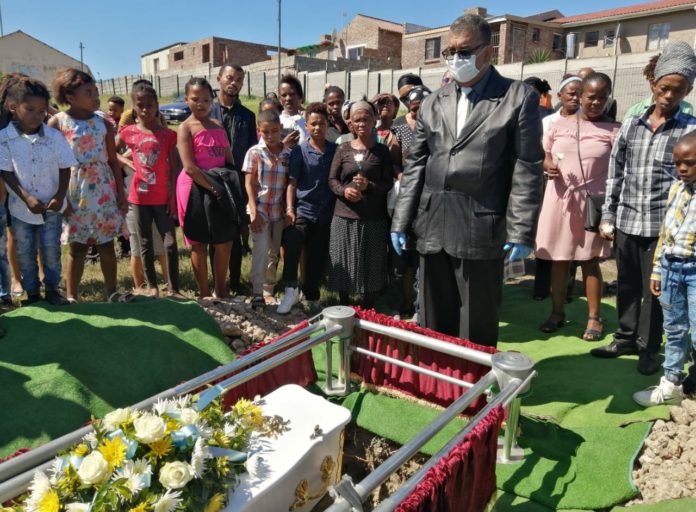 Odwa Duru is one of the leading undertakers in the Nelson Bay Municipality and he cries when he sees how many people get buried every day.

In the four days between Saturday and Monday, he buried 44 people and on Tuesday, the tragedy became personal.

Among the victims was his mother Nomtu Duru who died from the virus at the age of 64.

“My mother was healthy and she wasn’t on any treatment. But two months ago she said she was worried about the second wave as she was working at a hotel,” he said.

Odwa himself has survived the virus.

“I recovered from Covid-19 this year along with my seven staff members. But the way people are behaving now makes me worried,” he said.

He said although the people he buried over the weekend were elderly, he wanted to warn the youth.

“Change your behaviour. The virus is not a joke,” he said.

He said taverns, bars, parties and social gatherings are the main contributors to the spread of the virus.

“Patrons are kissing, hugging and touching one another while drunk. Some taverns are overcrowded and people are not wearing masks anymore. There is no more social distancing. They even share cigarettes,” Odwa said.

“We won’t defeat Covid-19 as long as people are not wearing their masks, do not wash their hands, or keep their social distance and stay at home.”

With 231,860 confirmed cases, Gauteng has the highest number of infections nationwide.

Professor Steven Friedman, writing in his personal capacity on the Democracy Development Program said anyone looking at South Africa’s debate in the media could be excused for imagining that Covid-19 is no longer a problem, but the daily statistics tell a different story.

On most days, around 2,000 new cases and a few dozen deaths are reported. So, it is not the virus which is on the wane, only interest in it among those who shape the national debate.