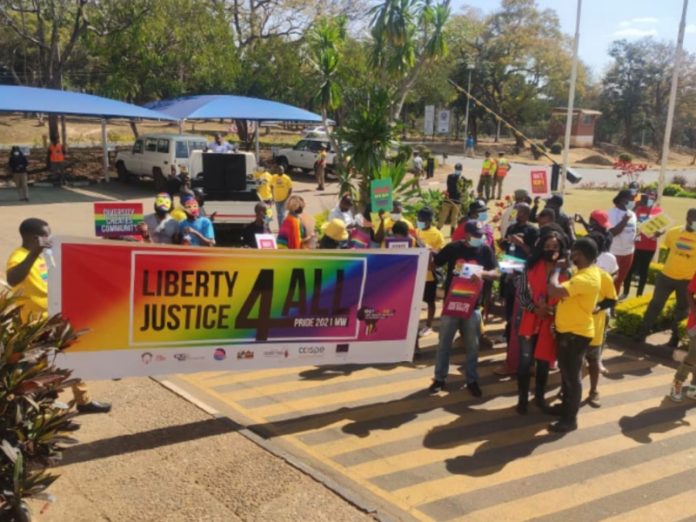 In Malawi, homosexuality is against the law and can land you up to 14 years in prison.

But over the weekend, about 50 members of the LGBTQ+ community defied the law, and marched through the country’s capital of Lilongwe in the country’s first ever Pride parade.

The parade aligned with annual Pride month, and took place on the weekend before international Pride day on Monday 28 June.

Despite the risk faced by the paraders, it was a joyous occasion.

Marcher Andreas, 29, told the Guardian, “I feel so happy to be part of this.

“To be a gay in Malawi is tough and it takes a lot of guts to be open like I am. I have been through a lot, including insults and discrimination. I’m lucky that I have a loving family which accepted me the way I am.”

Many were dressed in bright rainbow colours, with some carrying placards blazing the slogans, “embracing our queerness,” “pride unites world,” “love first” and “Malawi is for us too!”

To protect themselves from arrest, the paraders wore masks concealing their identities, while they danced and chanted “Viva LGBTI!”

As defiant and happy as the parade was, however, it provided only a moment of respite from the discrimination that the Malawian LGBTQ+ community faces every day.

Many paraders told the publication that they faced daily persecution and lived much of their lives in fear.

They told the publication stories of being blackmailed by the police, bullied at school, disowned by their families and forced to hide their sexuality in public.

Chrispine, 30, said that when his sexuality was discovered he was thrown out of his family home at 18.

“It was hard for me because no one wanted to associate with me. I was really depressed,” he said.

“Even in the political space I am not represented and am not allowed to have my say. I think this is historic and the moment we have been longing for. I know in the past we would not be able to do this.”

Previous Malawian governments have promised to review laws on homosexuality, but so far little action has been taken.