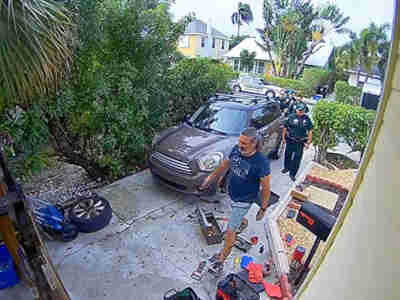 When patrol officers got emergency calls about the agonising screams of a woman crying for help, they raced to the residential house – but what they found, shocked them in a way they couldn’t believe possible!

While the cries of “Help! Let me out! Help! Let me out!” rang out again and again, Palm Beach County, Florida, Sheriff’s deputies questioned the male occupant of the house.

He went into the house and came out with “screamer” perched on his arm.

The stunning scenes were all captured on video recorded in December via the occupant’s high-tech security system.

After venturing inside, the man immediately returned with his 40-year-old pet parrot named Rambo perched on his arm.

Posting the video to social media, the owner said he taught Rambo to scream for help as a joke.

“I was changing the brakes on my wife’s car and had my 40-year-old parrot, Rambo, on his outside perch where he sings and talks,” said the owner.

“Sometime later four police officers showed up saying a neighbour called because she heard a woman screaming for help.”

The relieved officers burst out laughing.

“She too had a good laugh,” he wrote.